One Million Names to the Moon 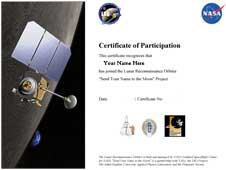 This is a copy of the certificate generated when you submit your name. It can be downloaded and displayed. Credit: NASA
> Larger image
One million and counting!

Did you say one million? That’s how many names have been submitted to blast off on NASA’s Lunar Reconnaissance Orbiter, or LRO, spacecraft.

Since May 1, NASA has invited the public to join the excitement of the first mission in NASA's exploration program to return humans to the moon by 2020. LRO, which is scheduled to launch later this year, will map the lunar surface in extraordinary detail and help future human missions to the moon locate safe landing sites and vital resources on the moon.

There is still time to be part of the adventure and send your name on a mission to the moon.

Participants can submit their names at the LRO web site and print a certificate. The names will be placed on a microchip that will be installed on the LRO spacecraft and travel to the moon. The deadline for submitting names is June 27, 2008.

This is an unprecedented number of people to take part in a send your name campaign. People from all over the world are telling NASA how excited they are to be part of the nation's journey back to the moon. Here are some of the more than 700 comments NASA received:

"We will all feel the journey to the moon when our names are there. A wonderful mission."

"I can't fly to the moon, so am thrilled my name will be there forever!"

"When I was young I always watched the moon wishing that I could go there. I never did, but my name could be there. That's better than nothing." 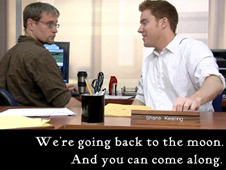 > View the 30-second trailer
Credit: NASA/GSFC You may ask how LRO reached one million people so quickly. Stephanie Stockman, LRO Education and Public Outreach lead has been exploring ideas for NASA to reach as many people as possible.

“The outreach team has been using social media and web 2.0 for the past year, and when it was time to send your name to the moon, I promoted it on my personal blog and Twitter account,” Stockman said. “Send your name also was set up as group on Facebook, and video was posted on YouTube.

"It was on blogs all over the world. I am amazed that we can reach thousands of people in days and millions of people in weeks,” she added.

Humans continue to be fascinated by the planetary body closest to home on Earth. This sentiment is summed up in the words of one commenter, "I want to join a lunar exploration journey with this opportunity."