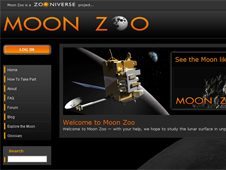 Screen capture of the Moon Zoo site.
› Visit the site 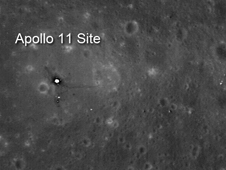 The Moon Zoo makes use of images, such as this one showing the Apollo 11 landing site, from the LRO Camera. Credit: NASA/Goddard/Arizona State University
› More about this image More than 37 years after humans last walked on the moon, planetary scientists are inviting members of the public to return to the lunar surface as “virtual astronauts” to help answer important scientific questions.

No spacesuit or rocket ship is required -- all visitors need to do is go to www.moonzoo.org and be among the first to see the lunar surface in unprecedented detail. New high-resolution images, taken by NASA’s Lunar Reconnaissance Orbiter Camera (LROC), offer exciting clues to unveil or reveal the history of the moon and our solar system.

“We need Web users around the world to help us interpret these stunning new images of the lunar surface,” said Chris Lintott of Oxford University and chair of the Citizen Science Alliance. “If you only spend five minutes on the site counting craters you’ll be making a valuable contribution to science and, who knows, you might run across a Russian spacecraft.”

Scientists are particularly interested in knowing how many craters appear in a particular region of the moon in order to determine the age and depth of the lunar surface (regolith). Fresh craters left by recent impacts provide clues about the potential risks from meteor strikes on the moon and on Earth.

“We hope to address key questions about the impact bombardment history of the moon and discover sites of geological interest that have never been seen before,” said Katherine Joy of the Lunar and Planetary Institute and a Moon Zoo science team member.

“The NASA Lunar Science Institute is very excited to be involved with Moon Zoo and support lunar citizen science,” said David Morrison, NLSI director. “Science and public outreach are cornerstones of our Institute; Moon Zoo will contribute to the accomplishment of important science, while being a major step forward in participatory exploration.”

The Moon Zoo Web site is a citizen science project developed by the Citizen Science Alliance, a group of research organizations and museums, and builds on the team's success with Galaxy Zoo, which has involved more than 250,000 people in astronomical research.

“The Lunar Reconnaissance Orbiter Project Science Office is excited to see LRO data being used for citizen science projects,” said Rich Vondrak, LRO project scientist from NASA’s Goddard Space Flight Center, Greenbelt, Md. “The Moon Zoo project provides an opportunity for everyone to participate in analysis of images from the LRO Camera and to make a significant contribution to scientific knowledge about the moon.”

The Lunar Reconnaissance Orbiter mission is managed by NASA's Goddard Space Flight Center, Greenbelt, Md. and the LROC instruments are based out of Arizona State University in Tempe, Az. The NASA Lunar Science Institute is based out of NASA’s Ames Research Center, Moffett Field, Calif.