Grow Text SizeShrink Text Size
Moon's Rough 'Wrinkles' Reveal Clues To Its Past
Written on the moon's weary face are the damages it has endured for the past 4-1/2 billion years. From impact craters to the dark plains of maria left behind by volcanic eruptions, the scars are all that remain to tell the tale of what happened to the moon. But they only hint at the processes that once acted—and act today—to shape the surface.

To get more insight into those processes, Meg Rosenburg and her colleagues at the California Institute of Technology, Pasadena, Calif. put together the first comprehensive set of maps revealing the slopes and roughness of the moon's surface. These maps are based on detailed data collected by the Lunar Orbiter Laser Altimeter (LOLA) on NASA's Lunar Reconnaissance Orbiter. LOLA and LRO were built at NASA's Goddard Space Flight Center in Greenbelt, Md. 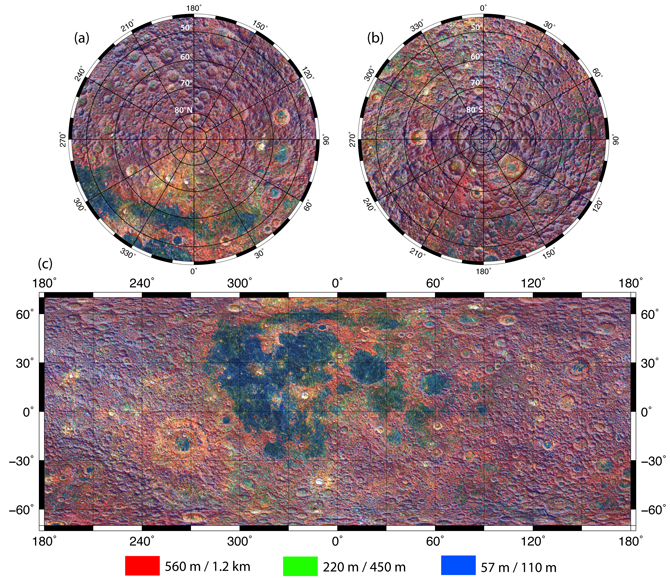 The colors in this image reveal information about the slope and roughness of the moon's surface. The slope of the surface depends on the spatial scale over which we choose to measure it, and the roughness is related to the slope. Here, the red channel shows slopes at the largest scale (half a kilometer or about one-third mile), green in between, and blue at the shortest scale (about 50 meters or 165 feet).

By looking at three scales simultaneously, researchers can identify features of interest, such as the maria, which are smooth at large scales and rough at short scales; these features appear blue. The rough terrain of relatively young craters appears white, while basin ejecta—material thrown out of the large craters at the time of impact—has an orange color, meaning that this material is rougher at the large scale than at the small scale. The map is adapted from the Journal of Geophysical Research (2011)
› Larger image

Like wrinkles on skin, the roughness of craters and other features on the moon's surface can reveal their age. "The key is to look at the roughness at both long and short scales," says Rosenburg, who is the first author on the paper describing the results, published in the Journal of Geophysical Research earlier this year.

The roughness depends on the subtle ups and downs of the landscape, a quality that the researchers get at by measuring the slope at locations all over the surface. To put together a complete picture, the researchers looked at roughness at a range of different scales—the distances between two points—from 17 meters (about 56 feet) to as much as 2.7 kilometers (about 1.6 miles).

"Old and young craters have different roughness properties—they are rougher on some scales and smoother on others," says Rosenburg. That's because the older craters have been pummeled for eons by meteorites that pit and mar the site of the original impact, changing the original shape of the crater.

"Because this softening of the terrain hasn't happened at the new impact sites, the youngest craters immediately stand out," says NASA Goddard's Gregory Neumann, a co-investigator on LOLA.

"It is remarkable that the moon exhibits a great range of topographic character: on the extremes, surfaces roughened by the accumulation of craters over billions of years can be near regions smoothed and resurfaced by more recent mare volcanism," says Oded Aharonson, Rosenburg's advisor at the California Institute of Technology.

By looking at where and how the roughness changes, the researchers can get important clues about the processes that shaped the moon. A roughness map of the material surrounding Orientale basin, for example, reveals subtle differences in the ejecta, or debris, that was thrown out when the crater was formed by a giant object slamming into the moon.

That information can be combined with a contour map that shows where the high and low points are. "By looking at both together, we can say that one part of Orientale is not just higher or lower, it's also differently rough," Rosenburg says. "That gives us some clues about the impact process that launched the ejecta and also about the surface processes that later acted to modify it."

Likewise, the smooth plains of maria, which were created by volcanic activity, have a different roughness "signature" from the moon's highlands, reflecting the vastly different origins of the two terrains. Maria is Latin for "seas," and they got that name from early astronomers who mistook them for actual seas.

Just as on the moon, the same approach can be used to study surface processes on other bodies as well, Rosenburg says. "The processes at work are different on Mars than they are on an asteroid, but they each leave a signature in the topography for us to interpret. By studying roughness at different scales, we can begin to understand how our nearest neighbors came to look the way they do." Elizabeth Zubritsky
NASA's Goddard Space Flight Center, Greenbelt, Md.
› Back To Top