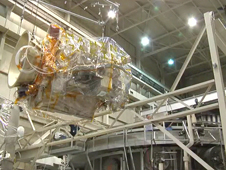 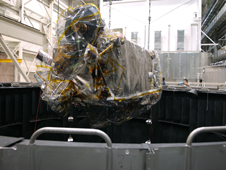 Photo of LRO as it was lowered into Goddard's Thermal Vac, which simulates both the vacuum and temperatures of space. Credit: NASA/Debbie McCallum
> Larger image
NASA's Lunar Reconnaissance Orbiter, or LRO, has begun environmental testing in a thermal vacuum that simulates the harsh rigors of space.

The spacecraft, built at NASA's Goddard Space Flight Center in Greenbelt, Md., has been lifted into a four-story thermal vacuum chamber there for a test that will last approximately five weeks. Once sealed in the chamber, the satellite will undergo a series of tests that simulate the space environment it will encounter when it orbits the moon.

"This is an exciting time for our project" said Cathy Peddie, LRO deputy project manager at Goddard. "Thermal vacuum testing is one of our major milestones. Not only are we checking out LRO in a test facility that most closely matches its final destination, but we are getting more 'hands-on' time operating LRO as we will see it next year at the moon."

The orbiter will carry seven instruments to provide scientists with detailed maps of the lunar surface and enhance our understanding of the moon's topography, lighting conditions, mineralogical composition and natural resources. Information gleaned from LRO will be used to select safe landing sites, determine locations for future lunar outposts and help to mitigate radiation dangers to astronauts.

The orbiter will be shipped to NASA's Kennedy Space Center in Florida early next year to be prepared for its April 24 launch aboard an Atlas V rocket. Accompanying the spacecraft will be the Lunar Crater Observation and Sensing Satellite, a mission that will impact the moon's surface in its search for water ice.
› Back To Top