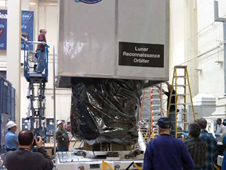 The Lunar Reconnaissance Orbiter is prepared and crated for its trip to the Kennedy Space Center on the morning of February 11. Credit: NASA/Andy Freeberg
> Largest available image
> View related video NASA's Lunar Reconnaissance Orbiter, or LRO, spacecraft was loaded on a truck Wednesday to begin its two-day journey to NASA's Kennedy Space Center in Florida. Launch is targeted for April 24.

The spacecraft was built by engineers at NASA's Goddard Space Flight Center in Greenbelt, Md., where it recently completed two months of tests in a thermal vacuum chamber. During its time in the chamber, the spacecraft was subjected to hot and cold temperatures it will experience as it orbits the moon.

The satellite's mission is one of the first steps in NASA's plan to return astronauts to the moon. LRO will spend at least one year in a low polar orbit on its primary exploration mission, with the possibility of three more years to collect additional detailed scientific information about the moon and its environment.

The orbiter will carry seven instruments to provide scientists with detailed maps of the lunar surface and enhance our understanding of the moon's topography, lighting conditions, mineralogical composition and natural resources. Information gleaned from LRO will be used to select safe landing sites, determine locations for future lunar outposts and help mitigate radiation dangers to astronauts. The polar regions of the moon are the main focus of the mission because continuous access to sunlight may be possible and water ice may exist in permanently shadowed areas of the poles. 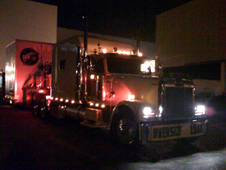 The truck that is driving LRO to Florida left the Goddard Space Flight Center before dawn to avoid as much traffic as possible. Credit: NASA
> Largest image available "This is the culmination of four years of hard work by everyone on the LRO Project," said Cathy Peddie, LRO deputy project manager at NASA's Goddard Space Flight Center in Greenbelt, Md. "LRO now begins its launch site processing, where it will be prepped for integration with our sister mission LCROSS, and eventually encapsulated in the Atlas V for its journey to the moon."

LRO's instruments have considerable heritage from previous planetary science missions, enabling the spacecraft to transition to a research phase under the direction of NASA's Science Mission Directorate one year after launch.

Accompanying LRO on its journey to the moon will be the Lunar Crater Observation and Sensing Satellite, or LCROSS, a mission that will impact the lunar surface in its search for water ice. The LCROSS mission is managed by NASA's Ames Research Center at Moffett Field, Calif.