Grow Text SizeShrink Text Size
LRO to Help Astronauts Survive in Infinity
Space seems exotic, forbidding, and remote, but imagine trying to survive winter without a heated shelter or warm clothing. Our ancestors developed these technologies because they needed room to grow; without them, we would still be confined to narrow areas along the equator, but with them, we could live anywhere in the world. With the right technology, space is just another place for people to live.

This is an artist's concept of a small lunar outpost. Credit: NASA
Print-resolution copy
We have been so successful at developing Earth's frontiers that we are now facing our planet's limits. What we need the most -- energy, resources, and room to live -- is becoming increasingly scarce. In space, such things are unlimited, as far as we can see.

NASA's return to the moon will develop the technology to open this unlimited frontier. As our closest celestial neighbor, the moon is the natural place to test new exploration technology. Astronauts can get home quickly if there is any trouble. In this sense, the moon is our gateway to the universe.

It is on the moon that we will develop technologies to survive in the infinite frontier of space, because the moon presents the same challenges we will encounter throughout the universe: harmful radiation, electrified dust, and extreme temperatures.

NASA will first send a robotic scout, called the Lunar Reconnaissance Orbiter (LRO), to orbit the moon in 2009. LRO will gather crucial data on the lunar environment that will help astronauts prepare for long-duration lunar expeditions. 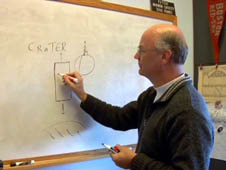 Powerful magnetic storms on the sun can blast charged particles -- electrons and atomic nuclei -- into space at near the speed of light. Magnetic storms that produce solar cosmic rays include solar flares, explosions in the sun's atmosphere that can deliver the energy of a billion one-megaton nuclear bombs, or coronal mass ejections, billion-ton eruptions of electrically conducting gas moving at millions of miles per hour.

The same particles also come from distant regions in our galaxy or even farther beyond. Sources like exploding stars and high-speed jets near black holes are believed to generate these cosmic rays.

Both types of cosmic rays present serious health hazards to unprotected astronauts. These particles act like microscopic bullets, crashing into cells and disrupting crucial molecules there, including DNA -- the instructions that produce molecules essential for life and choreograph their intricate "dance" that makes life possible. Low doses over time can increase the risk of cancer by mutating DNA. High doses in short periods, like what can be experienced during a solar storm, can cause acute radiation sickness, leading to organ failure or even death.

"CRaTER will quantify radiation risks to astronauts from cosmic rays, a missing measurement needed to reduce risks to explorers not only at the moon, but also throughout the local cosmos when humanity eventually ventures beyond our nearest neighbor," said Professor Harlan Spence, Principal Investigator for CRaTER at Boston University.

CRaTER will also test models of radiation effects and shielding, and measure radiation absorption by human tissue-like plastic, aiding in the development of protective technologies to help keep crews safe. 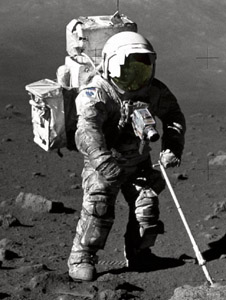 Geologist-Astronaut Harrison Schmitt, Apollo 17 lunar module pilot, uses an adjustable sampling scoop to retrieve lunar samples during the second extravehicular activity (EVA-2), at Station 5 at the Taurus- Littrow landing site. The cohesive nature of the lunar soil is born out by the "dirty" appearance of Schmitt's space suit. Credit: NASA

Lunar dust frequently irked the Apollo astronauts: "I think one of the most aggravating, restricting facets of lunar surface exploration is the dust and its adherence to everything no matter what kind of material, whether it be skin, suit material, metal, no matter what it be and its restrictive, friction-like action to everything it gets on," said Apollo 17 Commander Eugene A. Cernan during the Apollo 17 technical crew debriefing.

"For instance, the simple large-tolerance mechanical devices on the Rover began to show the effect of dust as the EVAs [Extravehicular Activities or moonwalks] went on. By the middle or the end of the third EVA, simple things like bag locks and the lock which held the pallet on the Rover began not only to malfunction but to not function at all. They effectively froze. We tried to dust them and bang the dust off and clean them, and there was just no way. The effect of dust on mirrors, cameras, and checklists is phenomenal. You have to live with it but you're continually fighting the dust problem both outside and inside the spacecraft. Once you get inside the spacecraft, as much as you dust yourself, you start taking off the suits and you have dust on your hands and your face and you're walking in it. You can be as careful in cleaning up as you want to, but it just sort of inhabits every nook and cranny in the spacecraft and every pore in your skin…I didn't feel any aerosol dust problem at all until after rendezvous and docking when I took off my helmet in zero-g and we had the lunar module cabin fan running the whole time. I did all the transfer with my helmet and gloves off, and I'm sorry I did because the dust really began to bother me. It bothered my eyes, it bothered my throat, and I was tasting it and eating it and I really could feel it working back and forth between the tunnel and the LM [Lunar Module]."

Lunar dust was so annoying to the Apollo astronauts because it's both sticky and abrasive. It is likely that much of the dust is clingy for the same reason clothes tend to stick together after they come out of the dryer – it gets electrically charged. The surface of the moon on its dayside is electrically charged by solar ultraviolet light and X-rays, which are energetic enough to release electrons from the lunar soil. The moon's surface also is charged by the highly variable plasma (a gas of electrically charged particles) environment that surrounds it.

Lunar dust is abrasive because it's formed by countless impacts from microscopic meteorites. These impacts made much of the dust jagged, like shards of glass. Since the moon's atmosphere is far too thin to blow it around and grind it smooth like wind does to sand on Earth, the dust stays sharp. Additionally, the barbed shape of the dust lets it hook in to things and stick even without an electric charge.

The Apollo missions lasted just a few days, so the dust was more of a nuisance, but it could become hazardous during the long-duration missions being planned. If tracked inside spacecraft, astronauts could inhale the dust shards. Over long periods, this might lead to lung diseases like those caused by asbestos or coal dust. The fragments could also disrupt sensitive equipment by clogging seals or grinding against moving parts.

Since lunar dust doesn't conduct electricity well, objects on the lunar surface tend to retain their charge. As a result, the same processes that electrically charge the dust could also charge up equipment or the astronauts themselves. Astronauts could make the problem worse just by walking around due to a process called "triboelectric" charging. Just as you get a strong jolt from somebody who shuffles across a carpet and then touches you to release static electricity, astronauts walking across the lunar surface might build up and deliver static shocks strong enough to disrupt sensitive equipment or experiments.

"Charging by sunlight tends to reduce the problem of triboelectric charging caused by astronauts walking across the lunar surface," said Dr. Timothy Stubbs, a LRO participating scientist at NASA Goddard and the University of Maryland, Baltimore County. "However, electrostatic discharges could be much more likely when in shadow, since the electric currents from the surrounding environment are greatly reduced. This means that it will take longer for the astronaut to discharge the build-up of triboelectric charge that they have accumulated. This increases the likelihood that there will be a significant voltage difference between the astronaut and any other object that they come into contact with."

Such a voltage difference could also cause charged dust to be attracted toward the astronaut, which might reduce the problem of triboelectric charging. "However, the bad news is that the astronaut would be coated in a layer of very fine abrasive dust, which would be difficult to remove," said Stubbs.

Stubbs will use LRO data to build computer models of areas on the moon where the electric charging and dust problems might be severe. LRO's Lunar Orbiter Laser Altimeter instrument will reveal the contours of the lunar landscape, while the Lunar Reconnaissance Orbiter Camera (LROC) will show where shadows fall as the moon orbits Earth. The models will be enhanced by adding data from other missions, like NASA's Lunar Atmosphere and Dust Environment Explorer, or LADEE, planned for launch in 2011.

"We're particularly interested in the polar regions, since NASA may send astronauts there to take advantage of potential resources in these areas," said Stubbs. "However, they are more complex than the Apollo landing sites, which were near the lunar equator and only explored during the lunar morning. At the poles, you have craters with depths that may be in permanent shadow and very cold, which enhances charging. Also, the terminator – the line dividing night and day – is constantly moving through this region. We really don't know this environment well. If you want to mitigate a problem, you have to understand it first. That's why modeling with data from LRO and other missions will be essential for our return to the moon."

This is an artist’s rendition of LRO's temperature map of a crater. Credit: NASA
Print-resolution copy
EXTREME TEMPERATURES

The complete lunar day-night cycle is about a month long. The Apollo astronauts landed during the morning when temperatures were moderate. However, at "noon" during the two-week day, temperatures near the equator reach around 225 degrees Fahrenheit (about 107 Celsius), and temperatures plunge to approximately 240 below zero Fahrenheit (about minus 151 Celsius) near the end of the two-week night. Since objects expand when heated and contract when cooled, this extreme temperature range will put stress on structures and equipment in a lunar outpost.

The same bitter cold resides at the bottom of permanently-shadowed polar craters. Some scientists believe there may be deposits of water ice in these craters. If there's enough to make it practical to mine, it would save the considerable expense of hauling water up from Earth. "However, at these temperatures, ice is as hard as rock. Also, it would be a challenge to operate equipment in these frigid temperatures," said Dr. Paul Lowman of NASA Goddard, a lunar geologist.

LROC will combine the images it takes over a year in orbit to make a movie that reveals areas getting the most sunlight, including any mountains at the polar regions that are in eternal sunshine, called Permanently Illuminated Regions. These areas would be good places for a solar power station. The movie will also reveal the areas that are never exposed to sunlight, called Permanently Shadowed Regions. Another instrument on LRO, named Diviner, will use infrared light emitted from the lunar surface to measure its temperature, creating a temperature map. Mission planers can then use these maps to get an idea of the temperatures expected at different locations and times.

There will always be surprises in exploration, but data from LRO will let us take a confident first step on our return to the moon and the journey beyond. Bill Steigerwald
NASA's Goddard Space Flight Center
› Back To Top