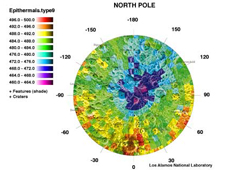 This is a map of potential hydrogen deposits on the north pole of the moon made using the Neutron Spectrometer instrument on the Lunar Prospector mission. Blue areas are where low numbers of neutrons were detected, marking regions with potential hydrogen or water ice deposits. Note the concentrations near the pole. Credit: William Feldman/Los Alamos National Labs
> Larger image
With Americans set to return to the moon, this time for much longer expeditions, the pressure is on to make the journeys safer and more affordable. That is the mission of NASA's robotic scout, the Lunar Reconnaissance Orbiter, also known as LRO. Scheduled for launch in late 2008, LRO represents NASA's first step toward returning humans to the moon by 2020.

The Lunar Reconnaissance Orbiter will conduct a one-year primary mission exploring the moon, taking measurements to identify future robotic and human landing sites. In addition, it will study lunar resources and how the moon's environment will affect humans. The mission also will involve a spacecraft called the Lunar Crater Observation and Sensing Satellite, or LCROSS, which will impact a permanently shadowed crater near a lunar south pole to search for evidence of polar water ice.

Scientists with NASA's Goddard Space Flight Center will help make this possible by analyzing the data coming from LRO, which also is being built and managed by Goddard. One proposal will search for hydrogen and water ice deposits in the permanently-shadowed craters of the lunar poles, and a second proposal will investigate whether electrically charged dust is propelled across the moon by electric fields on the lunar surface.

The hydrogen and water ice investigation is similar to a treasure hunt. "It costs tens of thousands of dollars per pound to put materials into space," said Dr. Timothy McClanahan of NASA Goddard. "That makes ordinary water on the moon more precious than gold. To make lunar exploration affordable, we need to use the resources of the moon as much as possible, so we can avoid the cost of bringing them up from Earth."

With almost no atmosphere, most of the moon is drier than the driest terrestrial desert. However, there may be concentrations of hydrogen, a component of water, and even some water ice at the bottom of craters in the lunar poles. The depths of some craters in the polar regions are in permanent shadow because the moon is only very slightly tilted from its spin axis. These places are very cold and are never exposed to direct sunlight. In these conditions, hydrogen and possibly water ice is thought to have accumulated over billions of years.

This diagram shows how positively charged dust on the moon's daylit side is transported across the horizon to the negatively charged night side. Credit: NASA/William Farrell
> Larger image Some scientists believe water vapor from past comet impacts has migrated across the lunar surface to the poles to become embedded in the soil at the bottom of these dark craters. Others believe hydrogen, a primary component of the solar wind, has become embedded in the lunar soil in these polar cold traps over time.

If water ice exists in the eternal shadows of the lunar poles, and it is practical to extract water from the soil, the water could be broken down into hydrogen and oxygen for use as rocket fuel and breathable air. Even sufficient concentrations of hydrogen by itself would be valuable because the hydrogen could be used as fuel or combined with oxygen from the soil to make water.

The investigation will use the presence of hydrogen as a sign of potential ice deposits. The moon is constantly being hit by cosmic rays, particles moving at almost the speed of light that come from explosions on the sun and in space. These particles hit the lunar soil and, like the break at the start of a pool game, create a shower of other particles. Neutrons, a component of the center of atoms, are among these particles, and some fly back out into space.

These neutrons can be detected by LRO's Lunar Exploration Neutron Detector, known as LEND. The neutrons have a wide range of speeds. If the neutrons hit hydrogen atoms in the lunar soil before being ejected into space, the impact will slow them down. As LRO scans the lunar surface, LEND counts the neutrons moving at speeds in the middle of the range. If LEND detects a decrease in the amount of neutrons moving at mid-range speeds, it means the neutrons are being slowed by impacts with hydrogen, so there is probably a concentration of hydrogen or even water ice in that particular area.

"The Lunar Prospector mission created rough maps of hydrogen concentrations based on this decrease in neutron speed," said McClanahan. "LRO will create maps with much greater detail, which is needed to make the search for hydrogen deposits practical."

McClanahan's investigation will help LRO scientists interpret what they are seeing from the LEND instrument by creating computer models of how the data will appear based on different temperatures, soil compositions, and levels of cosmic radiation.

Goddard's other investigation is to explore "dust fountains" on the moon. Read about that investigation at the Science@NASA Web site.

"During the Apollo era there were observations that provided compelling evidence that lunar dust could be electrostatically transported about the moon, possibly even to altitudes in excess of 62 miles (100 km)," said lead investigator Dr. Timothy Stubbs, a researcher with the University of Maryland, Baltimore County, who is contracted to Goddard. "These observations were mainly of a 'horizon glow' after lunar sunset, which was believed to be caused by sunlight scattered by lunar dust grains smaller than a few microns (a millionth of a meter)."

"The moon seems to have a tenuous atmosphere of moving dust particles," Stubbs explained. "We use the word 'fountain' to evoke the idea of a drinking fountain: the arc of water coming out of the spout looks static, but we know the water molecules are in motion."

In the same way, individual bits of moondust may be constantly leaping up from and falling back to the moon's surface, giving rise to a "dust atmosphere" that looks static but is composed of dust particles in constant motion.

The surface of the moon on its dayside is electrically charged by solar ultraviolet light and X-rays, which are energetic enough to release electrons from the lunar soil. The moon's surface also is charged by the highly variable plasma (an electrified gas of ions and electrons) environment that surrounds it. It is well known that dust can be ejected from the surface of the moon by meteorite impacts. However, under certain circumstances, it is possible that electrostatic forces acting between dust grains on the surface could act to repel dust away from the like-charged surface. This dust could then be lofted to high altitudes above the moon by surface electric fields. Such electrostatic ejection and transport mechanisms for lunar dust could explain some of the Apollo era observations of horizon glow.

While wonderful and strange, the dust could be hazardous to astronauts and equipment. The lunar soil was created over billions of years by impacts from countless tiny meteorites. With no atmosphere or water to wear them down, the dust fragments remain sharp and jagged. Since the dust is electrically charged, it sticks, much like clothes that have static cling. The Apollo astronauts noted the lunar dust got everywhere on their suits and inside the spacecraft. The Apollo missions lasted just a few days, so the dust was more of a nuisance, but it could become hazardous during the long-duration missions being planned. If tracked inside spacecraft, astronauts could inhale the dust shards. Over long periods, this might lead to lung diseases like those caused by asbestos or coal dust. The fragments could also disrupt sensitive equipment by clogging seals or grinding against moving parts.

Stubbs' dust investigation will determine how much lunar dust there is and create maps of electric fields on the lunar surface to help predict when and where this dust transport is likely to be most active. It will use instruments on LRO and other spacecraft to help build a complete picture of the lunar dust environment.

Trudy Bell, of Science@NASA, contributed to this article.
› Back To Top