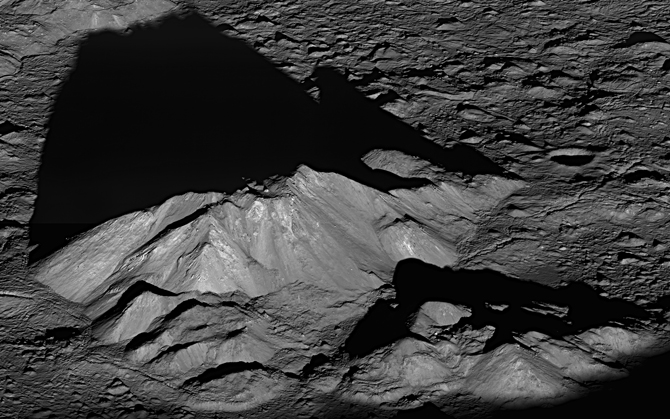 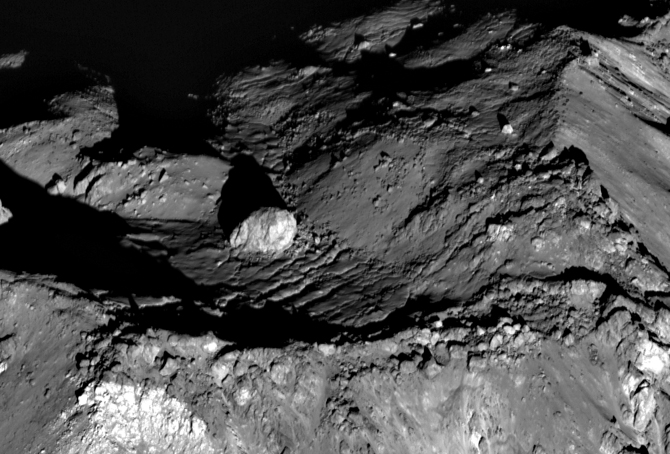 This image shows an oblique (angled) view of the summit area of Tycho crater's central peak. The boulder in the background is nearly 400 feet (120 m) wide. The image itself is about 3/4ths of a mile wide. (Credit: NASA Goddard/Arizona State University)
› View larger image 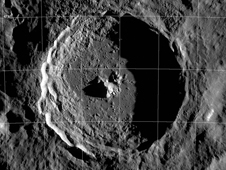 This LRO image mosaic shows Tycho crater under lighting conditions similar to those when the above "oblique" image was taken. North is up in this image, which is about 81 miles wide (130 km). Credit: NASA Goddard/Arizona State University
› View larger image
› Colorized topographical model of Tycho Many rock fragments ("clasts") ranging in size from some 33 feet (10 m) to hundreds of yards are exposed in the central peak slopes. Were these distinctive outcrops formed as a result of crushing and deformation of the target rock as the peak grew? Or do they represent preexisting rock layers that were brought intact to the surface?

Tycho's features are so steep and sharp because the crater is only about 110 million years old -- young by lunar standards. Over time micrometeorites and not-so-micro meteorites, will grind and erode these steep slopes into smooth mountains. For a preview of Tycho's central peak may appear like in a few billion years, look at Bhabha crater.

On May 27, 2010, LRO captured a top-down view of the summit (below), including the large boulder seen in the above image. Also note the fractured impact melt deposit that surrounds the boulder. And the smooth area on top of the boulder, is that also frozen impact melt? These images from the LRO Camera clearly show that the central peak formed very quickly: The peak was there when impact melt that was thrown straight up during the impact came back down, creating mountains almost instantaneously. Or did the melt get there by a different mechanism? The fractures probably formed over time as the steep walls of the central peak slowly eroded and slipped downhill. Eventually the peak will erode back, and this massive boulder will slide 1.24 miles (2 km) to the crater floor.

This image shows a vertical view of the Tycho central peak summit, highlighting the same 400-foot-wide boulder as in the above image. (Credit: NASA Goddard/Arizona State University)
› Larger image