Grow Text SizeShrink Text Size
LRO Showing Us the Moon as Never Before
Materials associated with the press briefing related to this feature can be found here.

NASA's Lunar Reconnaissance Orbiter (LRO) has forever changed our view of the moon, literally bringing it into sharper focus and showing us the whole globe in unprecedented detail.

This rich new portrait has been rendered by LRO's seven onboard instruments, which together have delivered more than 192 terabytes of data, images and maps -- the equivalent of nearly 41,000 typical DVDs. "This is a tremendous accomplishment," says Douglas Cooke, Associate Administrator of the Exploration Systems Mission Directorate at NASA Headquarters, Washington. "The exploration phase of the mission delivered a lot more than it originally promised, and that's been just the beginning for LRO."


The primary objective of the mission was to enable safe and effective exploration of the moon. "To do so, we needed to leverage the very best that the science community had to offer," says Michael Wargo, chief lunar scientist of the Exploration Systems Mission Directorate at NASA Headquarters, Washington. "And by doing that, we've fundamentally changed our scientific understanding of the moon." 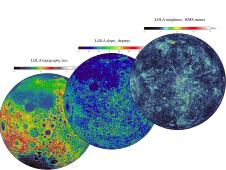 LOLA data give us three complementary views of the near side of the moon: the contours of the landscape, or topography (left), along with new maps of the surface slope values (middle) and the roughness of the topography (right). All three views are centered on the relatively young impact crater Tycho, with the Orientale basin on the left side. The slope magnitude indicates the steepness of terrain, while roughness indicates the presence of large blocks, both of which are important for surface operations. Credit: NASA/Goddard/Massachusetts Institute of Technology
› Larger image The most precise and complete topographic maps to date of the moon's complex, heavily cratered landscape have been created from the more than 4 billion measurements -- and still counting -- taken by LRO's Lunar Orbiter Laser Altimeter (LOLA). These maps are more accurate and sample more places on the lunar surface than any available before. In fact, LOLA has taken more than 100 times more measurements than all previous lunar instruments of its kind combined, opening up a world of possibilities for future exploration and for science.

Already, researchers have used LOLA data to put together the first comprehensive set of maps of the roughness of the moon's surface. Like wrinkles on skin, the roughness of craters and other features on the moon's surface can reveal their age. By looking at where and how the roughness changes -- and by combining that information with contour maps that show where the high and low points are -- researchers can get important clues about the processes that shaped the moon.

"Before LRO, we actually knew the shape of Mars better than we knew the shape of the moon, our nearest neighbor," notes LRO's Deputy Project Scientist, John Keller of NASA's Goddard Space Flight Center in Greenbelt, Md. "But because of LRO and LOLA, we now have detailed maps of both the near side and far side of the moon."

Though less familiar than the instantly recognizable near side, the moon's far side is no less fascinating. The far side is rougher and houses more craters, including one of the biggest impact basins in the solar system, called South Pole-Aitken. This remnant of an ancient and immensely powerful impact left such a profound crater that 34 Empire State Buildings stacked on top of each other still would not reach from its depths to its rim.

"With the wealth of data from LRO freely available, everyone can get to know the far side of the moon just as well as the near side," says Wargo.

A World of Resources

LRO's search for resources has revealed that the moon is even more extreme than we thought.

In the polar regions, deep and long-shaded craters, such as Shackleton crater in the south, have been of special interest because they can act as cold storage, capable of accumulating and preserving volatile material like water ice. But it was while studying Hermite crater near the moon's north pole that the mission's Diviner Lunar Radiometer Experiment found the coldest spot in solar system, with a temperature of -415 degrees Fahrenheit (-248 degrees Celsius or 25 Kelvins).


To further explore these regions, LRO's Lyman Alpha Mapping Project (LAMP), which can "see" in the dark, is imaging the shaded areas. Already, LOLA's precise measurements have been used to map solar illumination; this work has provided new insight into the shadowed regions and also revealed areas that receive nearly continuous sun. Because sunlight itself is a resource on the moon, knowing that there are areas that get sun for approximately 243 days a year and never have a period of total darkness for more than 24 hours is extremely valuable.

Complementing those efforts are both the Lunar Exploration Neutron Detector (LEND) and the Miniature Radio Frequency (Mini-RF) advanced radar. They are searching for deposits of water ice. LEND also seeks hydrogen, a resource of interest because of its potential use as fuel. And at the same time, the Cosmic Ray Telescope for the Effects of Radiation (CRaTER) studies the lunar radiation environment, which is important for keeping our astronauts healthy and safe as they explore.

A Picnic on the Moon

Stunning details of the moon's surface have been revealed by the Lunar Reconnaissance Orbiter Camera (LROC), which imaged nearly 5.7 million square kilometers of the moon's surface during the exploration phase of the mission. That is roughly the same amount of land as all contiguous states west of the Mississippi River.

Though earlier missions also imaged the moon, what sets LROC apart is its ability to image with surface pixels that are only 1.5 feet in size, small enough to distinguish details never before possible.

"With this resolution, LRO could easily spot a picnic table on the moon," says LRO's Project Scientist, Richard Vondrak of NASA Goddard.

And thanks to some operational efficiencies, the dual Narrow Angle Cameras that are part of LROC have delivered 50 percent more images than initially expected.

LRO was charged with surveying specific sites but with the added goal of making measurements globally across the moon. "LRO is designed to look down all the time, and most of the instruments are collecting data all the time," Wargo explains. "This, along with LRO's performance and reliability, has given us a more comprehensive view of the moon than ever before."

And there's plenty more to come from LRO. "Not only did we accomplish all of this during the exploration phase of the mission," says Vondrak, "but two more years of wonderful science are already under way."