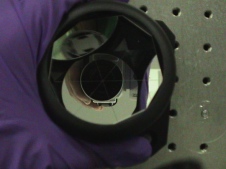 › Larger image
A retroreflector is a set of three mirrors, each at a perpendicular angle to the others, that will reflect light directly back in the direction from which it came. Credit: Solar Physics/Montana State University 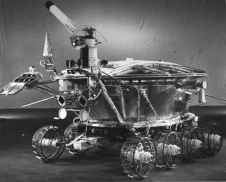 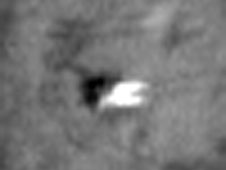 The initial imaging of the two Russian rovers, Lunokhod 1 and 2 were made earlier this year by the Lunar Reconnaissance Orbiter Camera (LROC) team, led by Mark Robinson from Arizona State University in Tempe.

On April 22, Tom Murphy from the University of California San Diego and his team sent pulses of laser light from the 3.5 meter telescope at the Apache Point Observatory in New Mexico, zeroing in on the target coordinates provided by the LROC images and altitudes provided by the Lunar Orbiter Laser Altimeter.

“We quickly verified the signal to be real and found it to be surprisingly bright: at least five times brighter than the other Soviet reflector, on the Lunokhod 2 rover, to which we routinely send laser pulses,” said Tom Murphy, an associate professor of physics at the University of California San Diego. “The best signal we’ve seen from Lunokhod 2 in several years of effort is 750 return photons, but we got about 2,000 photons from Lunokhod 1 on our first try. It’s got a lot to say after almost 40 years of silence.”

Since Apollo deployed laser retroreflectors, astronomers have routinely used them track how the moon is slowly moving away from the Earth. This helps scientists develop a better understanding of the processes that are causing this motion, including what’s occurring inside the moon’s core and the tidal motions on the Earth.

The Lunokhod 1 retroreflector was sent aboard the unmanned Luna 17 mission, which landed on the moon Nov. 17, 1970, releasing a robotic rover that roamed the lunar surface.

Murphy said his team had occasionally looked for the Lunokhod 1 retroreflector over the last two years, but had little chance of finding it until the LRO team produced coordinates based on the recent images of the lander and rover that were good to within 100 meters.

“It turns out that our previous best-guess position was miles off,” he said. “We could only search one football-field-sized region at a time, so without LRO, we never would have found it. But with the new coordinates, we found the signal promptly at the very edge of our available window.”

Locating Lunokhod 1 and measuring its exact coordinates is important in furthering our understanding of the moon.

“Getting more than a few photons back from an unknown location at the distance of the moon is quite an achievement. The rediscovery of the Lunokhod-1 retroreflector was made possible by the LRO camera team and by the diligence of Tom Murphy,” said Gregory Neumann, Lunar Orbiter Laser Altimeter team member from NASA Goddard Space Flight Center in Greenbelt, Md. “That we have located it so quickly and ranged to the Lunokhod rover, last heard from Sept. 14, 1971, is a tribute to Tom's team and to the amazing LRO observatory and instrument teams.”

LRO is scheduled for a one-year exploration mission in a polar orbit about 31 miles above the lunar surface. During this time, LRO will acquire information for a new comprehensive map of the lunar surface in unprecedented detail, search for resources and potential safe landing sites for a potential future return to the moon and measure lunar temperatures and radiation levels.

NASA’s Goddard Space Flight Center built and manages the mission for the Exploration Systems Mission Directorate at NASA Headquarters in Washington. The Institute for Space Research, Moscow, provides the neutron detector aboard the spacecraft.

More information can be found about LRO at:
› http://www.nasa.gov/lro