“Ka band” refers to a section within the microwave portion of the electromagnetic spectrum. Much like how listeners can’t pick up FM waves on AM radios and vice-versa, Ka band signals require special equipment to receive them.

The three new dishes help meet the growing demand for ground stations to handle high volumes of science data generated by today’s new satellites. The Ka band system allows satellites to transmit more data to the ground than ever before, in the area of 45 terabytes a month. That’s about the equivalent of 1,152 fully loaded 40-gigabyte iPods, or 67,408 CDs! 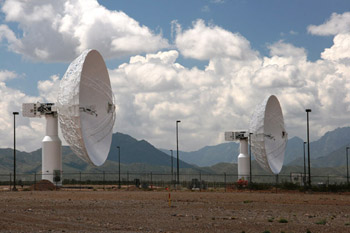 The dishes are 18.2 meters in diameter, and they need to be able to rotate quickly to acquire satellite signals. To make the dishes lighter they are largely held together with glue, rather than bolts and other fasteners. But this is no ordinary wood glue.

The network makes use of a two-part epoxy developed at NASA’s Jet Propulsion Laboratory in Pasadena, Calif. Tests have shown the glue and the dishes will last for decades, according to Raymond Pages, chief of Goddard’s Ground System Development Office.

The first missions to use the network will be the Solar Dynamics Observatory (SDO) and the Lunar Reconnaissance Orbiter (LRO). SDO will study solar variations that affect life on Earth. LRO will focus on selecting landing sites, identifying lunar resources and studying how the moon’s environment will affect humans. Both probes are slated for launch in late 2008.

“The design, development, and delivery of three 18-meter Ka band antenna systems in just over two years is a major accomplishment for Goddard and NASA,” Pages said. “People will be munching on data [from these missions] for years to come.”

Once SDO and LRO conclude, the antenna network will be available for other missions.

White Sands was chosen as the location for the new antennas because of the existing infrastructure available there, making it a cost-effective option. Weather was also a factor in the decision, because data must be able to reach the antennas with as little weather interference as possible for optimum quality.

The total development cost of the new antenna system was $20 million.