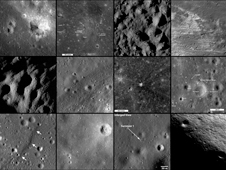 The seven instruments aboard the Lunar Reconnaissance Orbiter provide varied and unique datasets. This photo album published in concert with the first major public data release, gives a small taste of each instrument’s measurements and highlights some of the notable early achievements of the mission. Credit: NASA/GSFC/ASU
› Flickr gallery 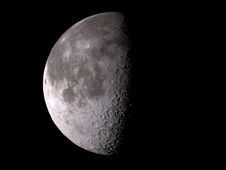 Because of its polar orbit, the data coverage from LRO is best at the lunar poles. This visualization shows datasets from three instruments at the moon’s south pole. Credit: NASA/GSFC/Moscow Institute for Space Research/UCLA/MIT
› Watch movie 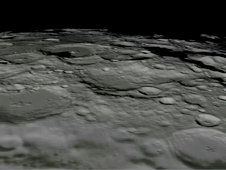 The Lunar Orbiter Laser Altimeter provides detailed topography of the lunar surface. This flyover of the south pole of the moon illustrates some of LRO’s early altimetry data. Credit: NASA/GSFC/MIT
› Watch movie GREENBELT, Md. – The public can follow along with NASA on its journey of lunar discovery. On March 15, the publicly accessible Planetary Data System will release data sets from the seven instruments on board NASA’s Lunar Reconnaissance Orbiter.

“The Planetary Data System is a NASA funded program to archive data from past and present planetary missions as well as astronomical observations and laboratory data,” said Dr. John Keller, LRO Deputy Project Scientist from NASA Goddard Space Flight Center in Greenbelt, Md. “The purpose of the Planetary Data System is to make available to the public the fruits of NASA funded research and to allow advanced research on solar system science.”

Each of the seven instruments is unique and will provide data in different formats to the Planetary Data System. Much of the data will be in a relatively low level form, not highly processed, which allows researchers to maximize flexibility in working with the data. The instrument teams will also provide higher level data products in the form of maps and calibrated images for the general public. Many of the images can be accessed using a computer with an internet browser.

Prior to the formal release of LRO data, the Lunar Reconnaissance Orbiter Camera team released several hundred images from the pair of Narrow Angle Cameras on-board the spacecraft. These images were released to give researchers a head start on using the data before the tidal wave of data was unleashed.

“We're able to take advantage of the close proximity of the Moon, compared to other objects in the solar system, to transmit data from LRO back to Earth at a very high rate,” said Keller. “The first data release is 55 terabytes. The one year exploration mission will deliver 130 terabytes of data, enabling a more detailed study our nearest celestial neighbor. We expect LRO to provide more data than all of the previous planetary missions combined.”

LRO was mandated to release data to the Planetary Data System beginning six months after initial operation. Some of the higher level data products require the full year of measurements and won't be released until after the end of the exploration mission. LRO will move into its science phase in September, when the program management responsibility moves from the Exploration Systems Mission Directorate to the Science Mission Directorate at NASA Headquarters.

LRO is scheduled for a one year exploration mission in a polar orbit about 31 miles above the lunar surface. During this time, LRO will produce a comprehensive map of the lunar surface in unprecedented detail, search for resources and potential safe landing sites for a potential future return to the moon and measure lunar temperatures and radiation levels.

The lunar bound spacecraft launched from Kennedy Space Center, Fla. on June 18, 2009. Since that time the spacecraft has completed calibration and commissioning. LRO formally began its detailed survey of the moon in September 2009. First results from the mission included - new looks at the Apollo landing sites; indications that permanently shadowed and nearby regions may harbor water and hydrogen; observations that large areas in the permanently shadowed regions are colder than Pluto; and detailed information on lunar terrain. LRO also supported the Lunar Crater Observation and Sensing Satellite impact, first by helping to select a promising site and second by observing both the expanding plume that arose after the impact and the evolving temperature at the impact site.

NASA’s Goddard Space Flight Center built and manages the mission for the Exploration Systems Mission Directorate at NASA Headquarters in Washington. The Institute for Space Research, Moscow, provides the neutron detector aboard the spacecraft.

To access the Planetary Data System, go to:
http://pds.nasa.gov

More information can be found about LRO at:
http://www.nasa.gov/lro