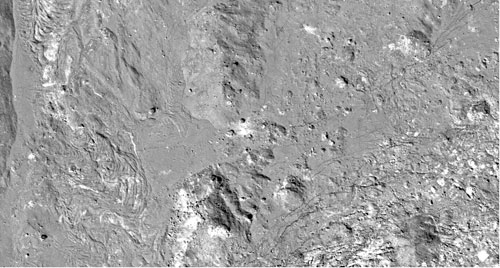 > View high resolution image
Giordano Bruno is one of the youngest large craters (22 km diameter) on the Moon. How old is "youngest"? Written accounts of twelfth century observations of a bright flash on the Moon may record the event that formed Giordano Bruno crater? That idea was proposed after the first high resolution pictures of the crater were analyzed from the Apollo era of lunar exploration. Scientists could see that the crater was very young, and was in the area of the Moon corresponding to the bright flash, so it seemed possible that the flash and crater were related. More recently a team of scientists analyzing high resolution images acquired by the Japanese lunar orbiter Kaguya estimated that the crater formed more than one million years ago. Very young by lunar standards, but certainly not consistent with the 12th century eyewitness reports! The Kaguya team determined the age of Giordano Bruno by counting the number of craters that formed on the crater subsequent to its formation. Were some of the small impacts discovered on the crater actually formed as late stage ejecta from the Giordano impact event itself rained down on the crater? If so the age may be younger than the current estimate. Hopefully, in the near future the true age of Giordano Bruno can be determined by radiometric age dating of impact melt rocks returned by the next generation of lunar explorers.

The very high resolution images being returned by LROC are revealing impact crater features in exquisite detail. Impact melt deposits display a wide range of forms on the floor, terraces, and flanks of Giordano Bruno. Wrinkles seen in upper left indicates the viscous nature of melt as it flowed against the crater wall (far left). Although formed by a different process, impact melts flow in much the same way as lava flows, forming lobes and exhibiting channels and levees. Like lava flows, they cease to move when their source is depleted or the melt cools and freezes into solid rock. The distribution of impact melts in and around impact craters provides important markers of the energy and dynamics of large scale impacts. As LROC collects more images of young craters scientists will be able to more accurately model impact processes and better understand the details of these incredibly energetic events. The scene is about 2200 m across; image resolution is 1.6 meters.