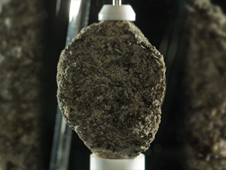 The golf ball-sized moon rock, on a long-term loan to ASU from NASA, will be on display in the Lunar Reconnaissance Orbiter Camera (LROC) Visitor Gallery on ASU’s Tempe campus.

Weighing 77 grams, or about 2.7 ounces, the lunar sample comes from a larger moon rock that was collected by Apollo 15 astronauts. The parent sample, from which the ASU rock was cut, weighed 9.6 kilograms, or about 21 pounds, and was the largest of the rocks collected during the Apollo 15 geologic traverses.

Informally named after its collector, Apollo 15 astronaut Dave Scott, the “Great Scott” rock was picked up about 13 yards (12 meters) north of the rim of Hadley Rille on August 2, 1971. It is part of the 842 pounds (382 kilograms) of lunar samples collected during six Apollo missions (1969 to 1972), and one of the most intensively studied samples.

Brownish-gray in color, sample 15555 is classified as medium-grained olivine basalt. Basalt is one of the most common types of rocks found on Earth, and is also one of the main lunar rock types. This rock crystallized from magma erupted from the mantle almost 3.3 billion years ago, and is predominantly composed of silicate minerals.

“Documented samples from the moon, or any asteroids and planets, are the key to unlocking how planets form and evolve," says Mark Robinson, professor in the School of Earth and Space Exploration in ASU’s College of Liberal Arts and Sciences. "The moon is especially interesting because it preserves a record of the early solar system that you simply can’t find on Earth, since plate tectonics and fluvial erosion have mostly erased Earth’s early geologic history. Most lunar rocks are older than the oldest Earth rocks found to date. Thus the moon can help scientists go back into the early stages of planet formation. However, it is fascinating to remember that it appears that some of the areas Apollo astronauts did not sample are relatively young, perhaps as young as 500 million years. What will we learn from these younger lunar rocks? A fascinating question left to the next generation of lunar explorers.”

The ASU moon rock is encased in a triangular NASA-prepared airtight glass case that is filled with inert gas to protect the sample from the terrestrial environment. It resides in a protective alcove encapsulated in a specially designed display secured by multiple levels of security. The display's creator, Chris Skiba, a research professional in the School of Earth and Space Exploration, was asked to design a display worthy of showcasing a priceless national treasure. Skiba stated that he had seen many lunar sample displays and wanted to “kick it up a notch” so the public could experience the sample in 360 degrees.

The moon rocks sits on top of a quartz plate, attached to a polished stainless steel stage that rotates displaying all sides of the moon rock. According to Skiba, this might be the only Apollo 15 lunar sample that rotates for public viewing.

“It is almost like you are holding it yourself and experiencing all sides of the moon rock,” says Skiba.

Skiba utilized the effects of the quartz and how it can transmit light. The quartz plate is illuminated by a blue LED that creates a stunning blue ring of light around the sample.

Several Apollo lunar samples are on long-term loan for public displays around the world. Display samples are historically allocated to major museums with relevant content, or places with a current or historical connection to lunar exploration. Mark Robinson is the principal investigator of the Lunar Reconnaissance Orbiter Camera (LROC) on board the Lunar Reconnaissance Orbiter (LRO) spacecraft. Key goals of the LRO mission are to collect comprehensive data sets on fifty scientifically intriguing sites, identification of lunar resources, studies of how the lunar radiation environment will affect humans, and answering fundamental lunar science questions.

The moon rock will be unveiled in the LROC Visitor Gallery on November 5. The LROC Visitor Gallery also features “The Lunar History Walk” hallway exhibit and additional interpretive exhibits in the Science Operations Center (SOC). The SOC handles the planning, targeting and data processing activities associated with the LRO camera, and is designed so that guests can observe the scientists at work behind a glass wall.
› Back To Top