Grow Text SizeShrink Text Size
The Ultimate Long Distance Communication
Anyone who's vacationed in the mountains or lived on a farm knows that it's hard to get good internet access or a strong cell phone signal in a remote area. Communicating across great distances has always been a challenge. So when NASA engineers designed the Lunar Reconnaissance Orbiter (LRO), they knew it would need an extraordinary communications system.

Over the next year, the LRO, NASA's diligent robotic scout, will collect more information about the moon's surface and environment than any previous mission. It takes a powerful system to send all of this information more than 238,800 miles back to Earth. 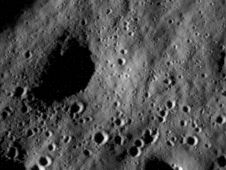 This image shows cratered regions near the moon's Mare Nubium region, as photographed by the Lunar Reconnaissance Orbiter. Credit: NASA A 13-inch-long tube, called a Traveling Wave Tube Amplifier, is making it possible for scientists to receive massive amounts of images and data from the orbiter at an unusually fast rate. It is the first high data rate K-band transmitter to fly on a NASA spacecraft.

L-3 Communications Electron Technologies built the amplifier under the supervision of NASA's Glenn Research Center in Cleveland. The device uses electrodes in a vacuum tube to amplify microwave signals to high power. It's ideal for sending large amounts of data over a long distance because it provides more power and more efficiency than its alternative, the transistor amplifier.

As the orbiter collects information about the moon's geography, climate and environment, the communication system transmits this information to a receiver at a Ka band antenna network at White Sands Test Facility in New Mexico. Scientists are using the data to compile high-resolution, 3D maps of the lunar surface. 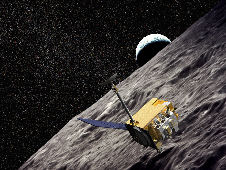 Traveling Wave Tube Amplifiers have been used for other planetary missions, such as Kepler and Cassini, but previous designs were less powerful. According to Rainee Simons, chief of Glenn's Electron and Optoelectronic Device Branch, engineers had to redesign the internal circuitry of the amplifier.

"In order to provide the power and frequency needed to send communications from the vicinity of the moon, it had to be custom designed and handmade," he said.

The orbiter's Traveling Wave Tube Amplifier is also more efficient than previous amplifiers. When it comes to launching satellites, weight means money. The heavier the spacecraft, the more fuel it needs to reach orbit. Because the new amplifier packs more power into a lighter design than previous microwave amplifiers, it's cheaper to fly.

The amplifier underwent vigorous spaceflight testing -- including vibration, thermal vacuum, radiation and electromagnetic interference tests -- to ensure that it could withstand the intense conditions of launch and lunar orbit.

Simons, Peterson and other members of the Glenn team were on standby when LRO entered its final orbit and began transmitting data. They were thrilled to hear that it's working properly, not only because LRO is a vital step toward returning humans to the moon, but also because they believe the new amplifier can improve life on Earth in countless ways.

If used on communication satellites, it could allow for much better tracking, monitoring and control of transoceanic flights and ships traveling beyond the reach of radar.

It also could enable real-time data transfer from future Earth-orbiting satellites. Such satellites are used to track migratory animals, endangered species, icebergs, volcanic eruptions and forest fires, and to aid in search and rescue operations. They're used to study climate change and meteorology as well.

According to Simons, by collecting more timely data about the interaction of our atmosphere, ocean and land, we could save lives and property during severe weather.

"This technology has the potential to create a better world," he said.