Grow Text SizeShrink Text Size
NASA Goddard Shoots the Moon to Track LRO
On certain nights, an arresting green line pierces the sky above NASA's Goddard Space Flight Center in Greenbelt, Md. It's a laser directed at the moon, visible when the air is humid. No, we're not repelling an invasion. Instead, we're tracking our own spacecraft. 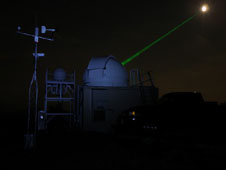 Goddard's Laser Ranging Facility directing a laser (green beam) toward the LRO spacecraft in orbit around the moon (white disk). The moon has been deliberately over-exposed to show the laser. Credit: Tom Zagwodzki/Goddard Space Flight Center
Print-resolution copy
28 times per second, engineers at NASA Goddard fire a laser that travels about 250,000 miles to hit the minivan-sized Lunar Reconnaissance Orbiter (LRO) spacecraft moving at nearly 3,600 miles per hour as it orbits the moon.

The first laser ranging effort to track a spacecraft beyond low-Earth orbit on a daily basis produces distance measurements accurate to about four inches (10 centimeters). For comparison, the microwave stations tracking LRO measure its range to a precision of about 65 feet (20 meters).

"Current lunar maps are not as accurate as we’ll need to return people safely to the moon," said Ronald Zellar of NASA Goddard, team lead for the LRO laser ranging system. "In order to make an accurate map, first you need to know where you are. Knowing the precise range to LRO is necessary for its instruments to produce much more accurate maps, with errors reduced to the size of humans or rovers."

"A further benefit of laser ranging to LRO is that it can improve knowledge of the moon's orientation and gravity, which are central to understanding its interior structure and to precision navigation," said Gregory Neumann, a Geophysicist at NASA Goddard. 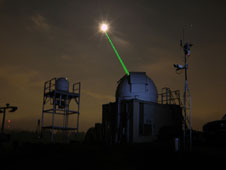 Goddard's Laser Ranging Facility from another side. Credit: Tom Zagwodzki/Goddard Space Flight Center
Print-resolution copy
Engineers use a telescope at the ground station on the Goddard campus to direct laser pulses toward LRO. The range to LRO is calculated by measuring how long it took the laser to reach the spacecraft.

The laser ranging to LRO is one way, meaning that the laser is directed at LRO, which records the time of arrival and sends the data back to ground stations on Earth by its radio telemetry link. This is the first time repeated, one-way tracking has been used for spacecraft ranging. Typical satellite laser ranging, used for spacecraft in low-Earth orbit, is two way, meaning the laser is simply reflected off the spacecraft and the time of flight recorded when it returns to the ground.

The advantage of LRO's one-way system is that a less expensive, lower-power laser system can be used -- especially important since the distance to LRO is hundreds of times greater than that to most Earth-orbiting spacecraft. Also, only a small receiver is needed on the spacecraft instead of a large retro-reflector array.

LRO's laser tracking presents unique challenges, however. First, there's the issue of avoiding interference. The laser pulses from Earth are received by a small telescope on LRO and transferred to the spacecraft’s laser altimeter instrument. The detector on this instrument performs double-duty, detecting both the laser ranging pulses as well as the pulses from its own laser reflected off the lunar surface. The instrument’s laser is used to build three-dimensional (topographic) maps of the lunar landscape and those pulses could hit the detector at the same time as the laser ranging pulses from Earth, confusing the data. So the pulses from Earth have to be carefully timed to avoid interfering with the instrument’s operation. Since the instrument sends laser pulses 28 times per second to the lunar surface, the laser ranging pulses are sent at the same rate but shifted in time to avoid interference. "It's like shooting at a spinning coin from a mile away and being able to hit it on the edge as it spins," said Neumann.

Another challenge is precise time measurement. Since the range to LRO is calculated by measuring how long it took the laser to reach the spacecraft, any variations in the time measurements will produce variations in the range estimates. LRO has a timing system that uses a crystal oscillator -- the heart of which is a vibrating crystal -- to measure time precisely. The oscillator is accurate to one part in a trillion over an hour. However, the rate at which the crystal vibrates changes with temperature, so the crystal is housed in a small oven which must be carefully controlled to maintain a stable temperature.

Then there's the difficulty of hitting a moving target. Since LRO is constantly moving in its orbit, the ground station must fire the laser pulses at a point in front of the spacecraft to compensate for the spacecraft's motion while the pulse is in-flight toward the moon. This is one of the reasons why LRO still relies on the traditional microwave tracking systems. They need the position of the spacecraft to know where to point the laser. The laser spot is 12 miles wide when it gets to the moon. Although this seems large on a human scale, it’s small in space and it would be easy to miss a tiny spacecraft moving 3,600 miles per hour. Even though the precision isn’t as great, without the microwave tracking system, the laser ranging system won’t work. This requires the LRO Mission Operations Center to track, predict, and communicate the position of the spacecraft to the laser ranging ground station.

Finally, there's the problem of bad weather; specifically, clouds. The laser can't penetrate thick cloud cover, so laser ranging is not available in those situations. Fortunately, there's plenty of opportunity to collect data over the course of LRO's one-year mission. "We're ranging to LRO whenever the moon is visible, 24 hours a day, 7 days a week," said Jan McGarry of NASA Goddard, ground system lead for laser ranging.

"Two-way satellite laser ranging (SLR) was developed at NASA Goddard in the 1960s," adds McGarry. "Since then, SLR has become a global effort, with about 30 countries participating and about 40 satellites carrying laser reflectors. NASA has eight SLR stations around the world, and Goddard is responsible for them. NASA is part of the global International Laser Ranging Service, an organization that provides a coordinated administration for all participating SLR stations and analysis centers." LRO's laser ranging effort is funded by the LRO project.

For more about Goddard's laser ranging facility, refer to: