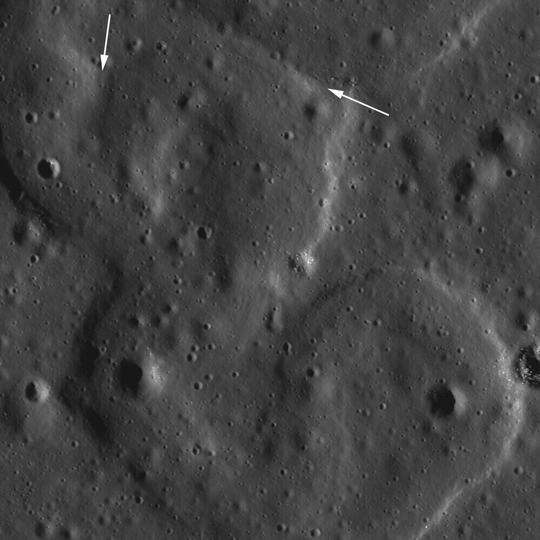 Two oxbow bends along the length of a sinuous rille located on a mare-filled crater floor. The tight twists and turns of the rille suggest that a very turbulent lava flow formed this rille. The image is a little less than 1 mile across. Credit: NASA/Goddard Space Flight Center/Arizona State University
› Larger image

The sinuous rille in this image meanders, twisting and turning in very tight oxbows (the horseshoe-shaped channels), across a mare-filled crater floor. Sinuous rilles are believed to be of volcanic origin. The tight, winding nature of this rille is consistent with erosion by a turbulent flow of low-viscosity (very fluid), very hot lava. Within the turbulently flowing lava, eddies and vortices probably formed, which may have contributed to the erosion of the mare surface, creating twists that nearly touch and rarely appear to merge (two such areas are designated by arrows). This image shows an area located to the northeast of Ulugh Beigh Crater on the northwestern boundary of Oceanus Procellarum.
› Back To Top