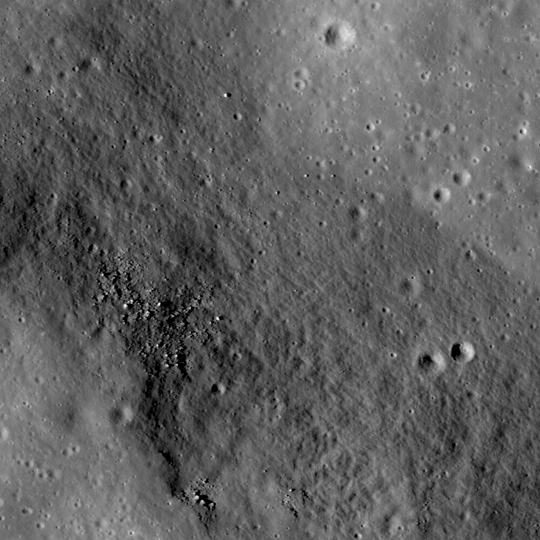 The linear rille Rima Ariadaeus is found on the nearside of the Moon, nestled between Mare Tranquillitatis and Mare Vaporum. Most linear rilles are believed to represent tectonic faulting and can be used to determine stratigraphic relationships on a surface. Image width is 1.2 km (3/4 mi). Credit: NASA/Goddard Space Flight Center/Arizona State University
› Larger image

Rima Ariadaeus is one of several linear rille systems nestled in the highlands between Mare Vaporum and Mare Tranquillitatis. Some rilles, such as Vallis Schroteri, were formed by volcanic eruptions. Other rilles, such as Rima Ariadaeus, are believed to be faults that formed as a result of tectonic activity. Some scientists believe that the linear rilles might have formed after large impact events, while others believe that the rilles were formed as a surface manifestation of deep-seated dike systems when the moon was still volcanically active.

The stratigraphic relationships between the rille and other surface features can help determine whether the rille is older or younger than these features with respect to relative age. For example, the rille cross-cuts a ridge in the middle-left of the WAC frame (near the arrow in the WAC image below); this relationship suggests that the rille is younger than the ridge, because the rille changed the shape of the ridge. However, in the LROC NAC image, there are small craters present on the rille floor, which suggests that the rille is older than these superposing craters. These types of observations are used to examine stratigraphic relationships and the relative ages of landforms in this region so that scientists can reconstruct the moon's geologic history. 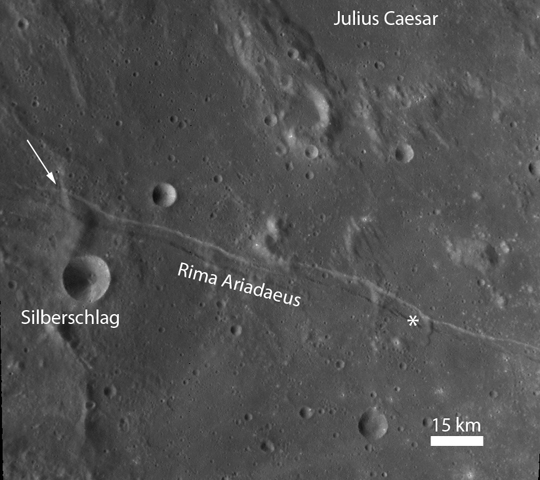 This image provides context for today's featured image, the location of which is shown by the asterisk. Credit: NASA/Goddard Space Flight Center/Arizona State University
› Larger image