Grow Text SizeShrink Text Size
The Rim of Milichius A 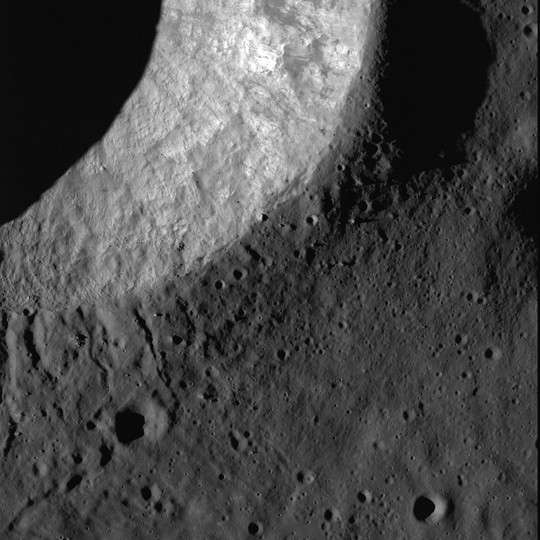 This image shows part of the rim of crater Milichius A. Milichius A is a Copernican-aged crater (meaning it is less than 1.1 billion years old) in the middle of Mare Insularum. The "cracked" appearance of the rim exterior is a result of melted rock flowing out after impact. This outflow is fairly common among craters of similar size and age to Milichius A.

There are many different sizes of impact craters in this view. Only part of Milichius A, which is 9 km (5.6 miles) across, is shown. The smallest are just a few meters across. While there are numerous smaller craters surrounding Milichius A, its interior seems to have far fewer craters than the exterior area. Does this mean that there have been no impacts on the inner wall of Milichius A? Probably not; there have almost certainly been many small impacts on the steep surface. Instead, the streaks that you see on the crater walls are places where rocky debris has simply slumped into the crater, covering and obscuring the smaller craters as it slides down. Some of the darker streaks, however, may actually be impact melt flows.

The Lunar Reconnaissance Orbiter Camera was built by Malin Space Science Systems in San Diego, California, and is operated from the LROC Science Operations Center, part of the School of Earth and Space Exploration at Arizona State University in Tempe, Arizona.
› Back To Top