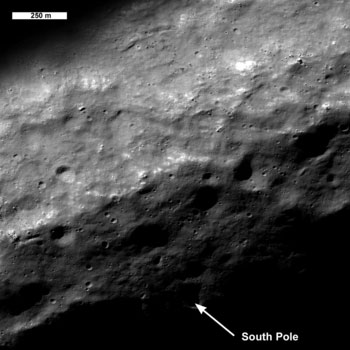 > View higher resolution image
During the LRO Commissioning Phase, the high-resolution Lunar Reconnaissance Orbiter Camera (LROC) captured this 1-m pixel scale (angular resolution) two-image mosaic of the lunar south pole, which is located on the rim of the 19-km diameter Shackleton crater. At meter scales features such as boulders and ridges can be mapped, paving the way for future explorers. Right now we know little of the poles and much is to be learned from the data now being returned from LRO. The rim of Shackleton crater is a prime candidate for future human exploration due to its proximity to permanently shadowed regions and nearby peaks that are illuminated for much of the year. The permanent shadow may harbor cold-trapped volatiles deposited as comets and asteroids impacted the Moon over the past billion years or more. Highly illuminated peaks provide opportunities for solar power during most of the year for future human habitation.

Over the past year the Japanese Kaguya and Indian Chandrayaan spacecraft gave us our first high-resolution look at the lunar south pole and Shackleton crater and revealed an exceptionally deep and rugged interior for its size. Usually craters fill in with time as their walls slump and material from afar is thrown in by distant impacts. Since Shackleton crater is so deep and rough inside scientists might infer it is relatively young. However, much of the rim of Shackleton appears rounded and is peppered with smaller craters – indications of a relatively ancient age. Right now it is not clear if Shackleton crater is old or young. Many more LROC Narrow Angle Camera (NAC) images of this area will be obtained over the coming months as the south pole emerges from the shadows of winter and a more complete picture will appear.

The full NAC mosaic reveals a shelf on the southeast flank of the crater that is more than two kilometers across and perfectly suitable for a future landing. The extreme Sun angle gives the surface an exaggerated rough appearance, but if you look closely at this scale any area that is between the small craters might make a good landing site. The NAC can see details with ten times greater resolution than previous datasets allowing lunar geologists to map features at a human scale. Where should explorers land, and where should they visit once on the surface? Where can they find resources, and where can they sample a diversity of geologic materials? Over the coming months the whole area will be characterized in detail by all of the LRO instruments, and scientists will have the data to investigate these questions and more.

The Lunar Reconnaissance Orbiter Camera was built by Malin Space Science Systems in San Diego, California, and is operated from the LROC Science Operations Center, part of the School of Earth and Space Exploration at Arizona State University in Tempe, Arizona.

› For more images and information