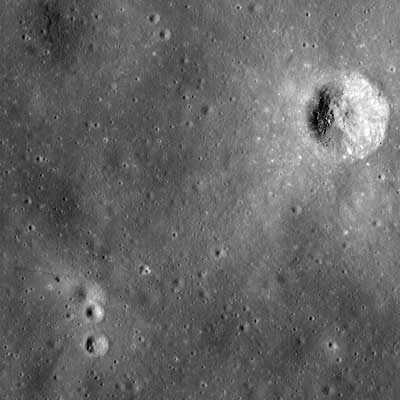 Uncalibrated LROC NAC image of the Apollo 14 landing site and nearby Cone crater. The trail followed by the astronauts can clearly be discerned. Image width is 1.6 km. Credit: NASA/GSFC/Arizona State University

A month has already passed since LROC acquired its first images of the Apollo landing sites. In this time the Moon completed one rotation beneath LRO’s orbit, thus providing another set of overflights. Because LRO is not in synch with the lunar day we see the same ground with different lighting – this time the Sun is 24 degrees higher above the horizon providing a clearer view with fewer shadows. Albedo contrasts are greater, and more clearly show soil disturbances from landing, astronaut surface operations, and blast off.

During the second EVA, the astronauts performed what is known as a “radial traverse” across the ejecta field and up to the rim of Cone crater. When impact craters form, rocks excavated from the deepest parts of the crater fall near the rim; surface rocks end up away from the crater. Thus, as explorers move up a crater's ejecta blanket, they can sample a complete stratigraphic section of geologic materials providing priceless insights about the composition and nature of the lunar subsurface. Think of an impact crater as a natural roadcut exposing rocks from depth. In this LROC image, you can follow nearly the whole path walked by the two astronauts. The term “radial traverse” does not quite do the crew of Apollo 14 justice. Their journey sounds like a stroll in the park, however the reality is quite the contrary. The hike up Cone crater was quite challenging. For the first time, astronauts traveled out of the sight of their lunar module while hiking uphill over 1400 meters with only a poor map, dragging the tool cart (MET), and wearing their bulky spacesuits. It was an amazing feat that the two astronauts made it to the top of Cone ridge and acquired all their samples. They ended up about 30 meters shy of peering into Cone crater itself, surely a disappointment at the time, but absolutely no reflection on the success of the traverse and the scientific results gleaned after the mission. 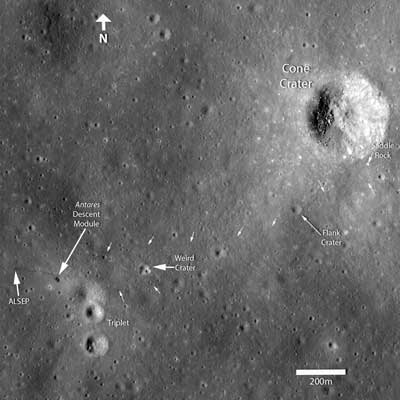 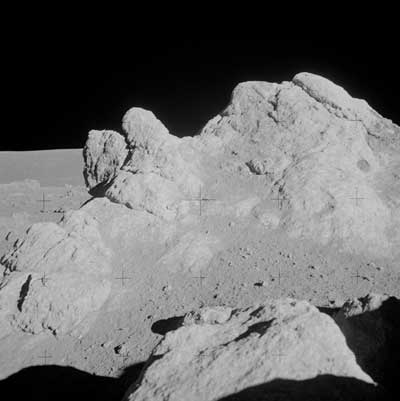 Fra Mauro was one of only two highlands sites to be visited during Project Apollo, and the samples collected at the Apollo 14 landing site continue to provide lunar scientists with important insights into the geology of the Moon. Nearly all of the Apollo 14 samples are breccias (or rocks formed from pieces of other rocks, often held together by an impact-melt matrix). Since the Fra Mauro formation is ejecta from the Imbrium basin-forming event, age-dating the samples returned by Shepard and Mitchell in terrestrial laboratories indicated that the Imbrium basin formed approximately 3.85 billion years ago, providing a crucial absolute age date for the formation of the Imbrium basin.

Despite the momentous discoveries made by the Apollo 14 and Apollo 16 crews as they explored the highlands, there is still much we do not know. In particular, lunar scientists are eager to use the remote sensing data returned by the Lunar Reconnaissance Orbiter, Kaguya, and Chandrayaan-1 to look for evidence of highland rock types which may be underrepresented in the current Apollo sample collection. Since we only explored two highland locations located in close proximity, it is possible that there are highland rock types which have not yet been sampled. By identifying the location of any under-sampled rock types on the lunar surface using orbital data, the scientific results obtained by these new lunar scouts will help to determine the places on the Moon where we need to send future human explorers.