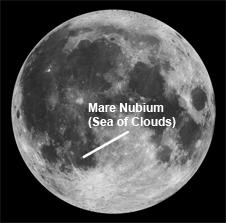 1994 Clementine image of the moon with Mare Nubium labeled. LRO's first lunar images show an area near this region. Credit: NASA NASA's Lunar Reconnaissance Orbiter has transmitted its first images since reaching the moon on June 23. The spacecraft's two cameras, collectively known as the Lunar Reconnaissance Orbiter Camera, or LROC, were activated June 30. The cameras are working well and have returned images of a region in the lunar highlands south of Mare Nubium (Sea of Clouds).

As the moon rotates beneath LRO, LROC gradually will build up photographic maps of the lunar surface.

"Our first images were taken along the moon's terminator -- the dividing line between day and night -- making us initially unsure of how they would turn out," said LROC Principal Investigator Mark Robinson of Arizona State University in Tempe. "Because of the deep shadowing, subtle topography is exaggerated, suggesting a craggy and inhospitable surface. In reality, the area is similar to the region where the Apollo 16 astronauts safely explored in 1972. While these are magnificent in their own right, the main message is that LROC is nearly ready to begin its mission." 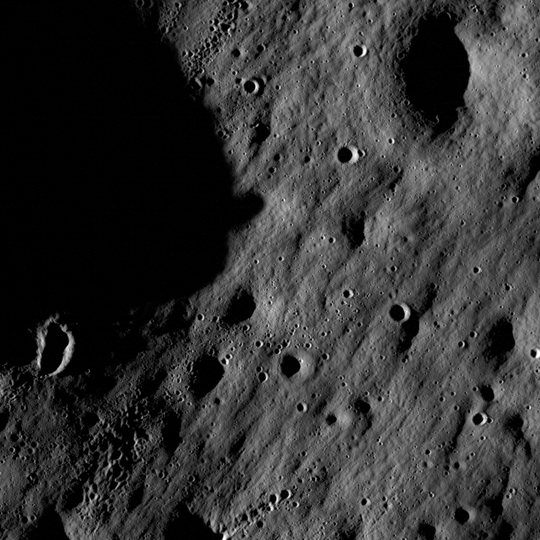 These images show cratered regions near the moon's Mare Nubium region, as photographed by the Lunar Reconnaissance Orbiter's LROC instrument. Impact craters feature prominently in both images. Older craters have softened edges, while younger craters appear crisp. Each image shows a region 1,400 meters (0.87 miles) wide, and features as small as 3 meters (9.8 feet) wide can be discerned. The bottoms of both images face lunar north.

The image below shows the location of these two images in relation to each other. The locator image shows an area 3,542 meters (2.2 miles) wide by 14,000 meters (8.7 miles) long. The scene is at the lunar coordinates 34.4 degrees South by 6.0 degrees West.

The image below shows a raw image of the region photographed by one of the LROC cameras. Each band in this "venetian blinds" image is about 90 km (55.9 miles) wide. For comparison, the width of the locator image above is shown here as two white lines. 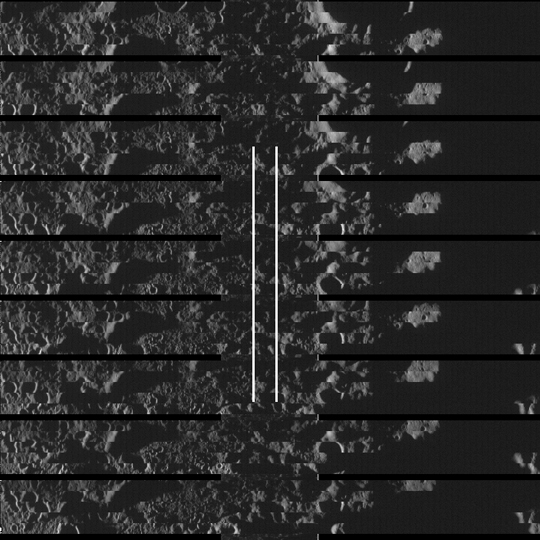