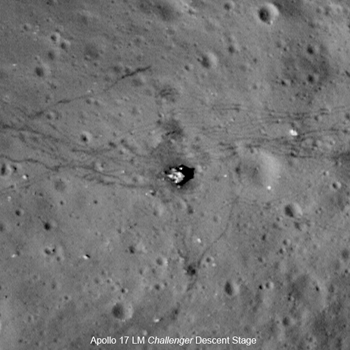 
Normally the Lunar Reconnaissance Orbiter (LRO) orbits the Moon in a 50 km altitude, near-circular, polar orbit. The orbit is “near”-circular, as LRO’s altitude can vary between its lowest altitude (periapsis) of 35 km and its highest altitude (apoapsis) of 65-km over a twenty eight day period. If left unattended, the Moon’s lumpy gravity field would further perturb LRO’s orbit, driving the periapsis altitude lower and lower, eventually causing LRO to impact the surface in about seventy days. However, by design LRO has propellant to perform a pair of orbit maintenance (or station-keeping) maneuvers every twenty eight days to keep LRO safely in its 50±15 km near-circular orbit. Since its launch on 18 June 2009, LRO has performed twenty five pairs of station-keeping maneuvers to maintain its orbit.

For some of the LRO instruments there are advantages to being at a lower altitude. On August 10th a special pair of station-keeping maneuvers were performed in place of the standard maneuvers. This time LRO was placed into an orbit such that the lowest altitude during the next month was close to 21 km above the mean surface! Actual data computed by the LROC team showed that the lowest altitude achieved over the true lunar surface (accounting for local topography) was 22 km (subject to revision). Just over 72,000 feet, only twice as high as a commercial jetliner typically flies above the Earth!

The average altitude for the low-periapsis period is still 50 km, as in the nominal mission orbit, but the orbit altitude can vary by as much as ±29 km. When the periapsis is low, the apoapsis is correspondingly high. The LRO Flight Dynamics Team carefully designed the maneuvers so that the lowest altitudes occurred over some of the Apollo landing sites (enabling somewhat higher resolution imaging) and that the lumpy gravity field did not adversely affect the LRO orbit over the twenty eight day period. On September 6th LRO will perform another set of station-keeping maneuvers to return to the nominal 50±15 km orbit.

For LROC, the main goal of the low-orbit month was to obtain WAC coverage of the nearside mare at an average pixel scale of 50 meters (or better). At the lowest altitudes, the LROC Wide Angle Camera (WAC) pixel size decreases to smaller than 40 meters from the usual 75 meters.

Does the LROC Narrow Angle Camera (NAC) also obtain images with two times higher resolution from the low periapsis observations? The answer is yes, in one direction. Just like the WAC, the NAC pixel size is two times smaller on the surface. However, the spacecraft is moving above the surface at speeds greater than 1640 meters a second! The fastest exposure time for the LROC NAC is 338 microseconds (1/3 of a thousandth of a second). In that time the spacecraft has moved 50 cm. So from 25 km altitude, a NAC pixel is 25 cm across the ground-track, but is smeared downtrack to 50cm. How do you look at an image with rectangular pixels? You simply resample the image to square pixels. But at what resolution — 25 cm or 50 cm? Or perhaps halfway in-between? It is somewhat of a matter of choice depending on what you want to do with the final image. Over-sampling the image to 25 cm means that the down-track pixels are replicated. Likewise under-sampling to a 50 cm image results in two cross-track pixels averaged into one (down-track pixels remain unchanged). The 25-cm image will be sharper in the cross-track direction than the down-track direction, however the overall effect on image quality is not very noticeable (the image looks great!). The 50-cm image will look very sharp overall, however in certain cases the ability to discriminate the finest details may be diminished. 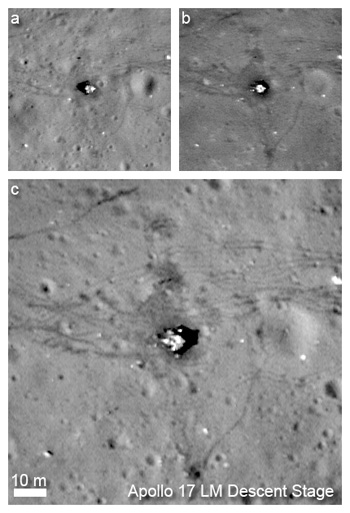 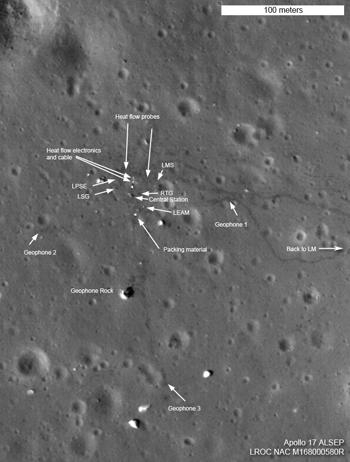 
The low altitude image reveals new details visible around the LM, LRV, and ALSEP; the old hardware beckons us to return! 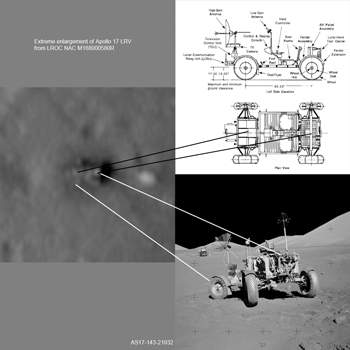 
LROC also obtained low altitude images of the Apollo 12 and 14 landing sites, more on these images later this week.

What have these new higher resolution images allowed us to find? Among other targets, we have examined three Apollo landing sites at even higher resolution and better determined details of the placement of the instruments on the surface, and more accurately place sample sites. Additionally, we can better distinguish debris (insulation blankets) that was scattered across the area during the liftoff of the upper stage of the Lunar Module. The big return is of course in new details that will be distinguished from many places on the Moon. We will have over 1500 NAC pairs acquired with the LRO altitude lower than 25 km!

Examine in detail the Apollo 17 landing site, and a flyover movie! Note that in the LM enlargement the footpad is seen at the six o'clock position, and the ladder is just to the right and between the two PLSS backpacks.