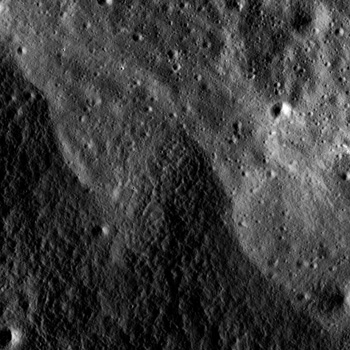 
The lobate forms in this image look like lava flows, but they're something very different. These are 'deceleration lobes' in the extended ejecta blanket of King crater (5.0°N and 120.5°E), located approximately 50 km due west of the King crater rim. North is up, and sunlight shines from the west.

They resulted as ground-hugging debris flows, accelerated by the prodigious energy of the explosive King impact event, met with pre-existing topography and was ground (literally) to a halt - much in the way that avalanches can behave as they interact with the topography of a mountain slope. Sometimes such lobes will catch up to and override one another like shingles on a roof. These features were first studied in the early 1970's, when photographs taken of the region from the orbiting Apollo 16 Command Module where returned to Earth. Similar features can be found within many areas of the distal ejecta deposits associated with the King crater impact.

Imagine being witness to this event as the ancient planetesimal that struck the Moon and excavated King crater set these walls of rock and debris into motion. They forced their way across the lunar surface for tens of kilometers, smothering everything in their paths until they finally lost energy and stopped where we see them today. It would have been an astonishing and very dramatic thing to see.