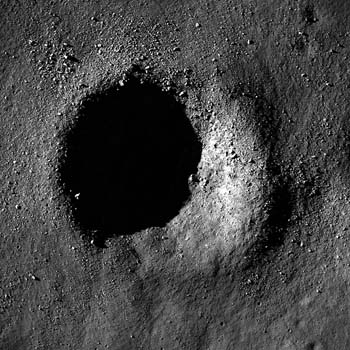 › View larger image
Low Sun image of a fresh crater in the lunar highlands. Boulders are scattered within and around the 550 m crater. Image width is 950m, LROC NAC M150062296R [NASA/GSFC/Arizona State University].


Small craters on the Moon come in a variety of morphologies, and knowing how they differ is key to understanding their formation. This crater (51.42°S, 68.73°E) is surrounded with a high density of boulders. Was this crater formed by a primary or secondary impact? When a bolide (anything that impacts a planet, usually an asteroid or comet) impacts a more coherent material (solid rock for example), the ejecta contains a high percentage of boulders. So the boulders seen above could indicate a stronger subsurface. While primary bolides typically impact the Moon at speeds of 15-20 km/s, secondary impacts occur at much slower speeds. Any ejecta traveling faster than the escape velocity (2.38 km/s) will not impact the Moon. Because of the lower speed, ejecta impacts the Moon with less energy, which could lead to a smaller and more bouldery crater if the ejecta itself was a large piece of solid rock that shattered upon impact. In either case, these boulders would make excellent targets for sample return so that scientists can better understand how to definitively tell the difference between primary and secondary craters. 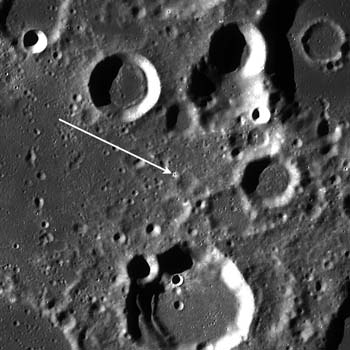