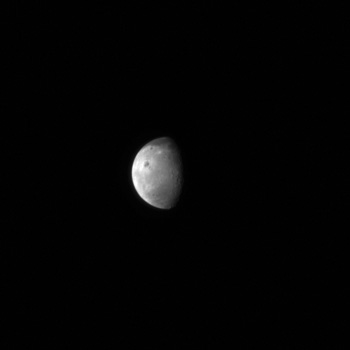 This image was not taken simply because the Moon is beautiful and inspiring; it serves to help the MESSENGER team calibrate the camera and spectrometer. The Moon is a good calibration standard because its reflectance and color have been measured with many instruments, so it is useful to make comparisons between instruments with different characteristics. In other words, it is a check on the quality of the Earth-based calibration.

LROC is an important new contributor to our understanding of how light interacts with the lunar surface especially in ultraviolet wavelengths. In particular, the new WAC color images will help to calibrate the MESSENGER MASCS spectrometer, which measured the Moon at the same time the MDIS camera snapped this picture.

The MESSENGER MDIS view of the Moon is centered about -60°, 280°. Mare Orientale is the the small dark spot in the upper left. For a closeup of Orientale see the recent LROC Featured Image. The same viewpoint as the MESSENGER image was used to create a higher resolution view from the LROC WAC. 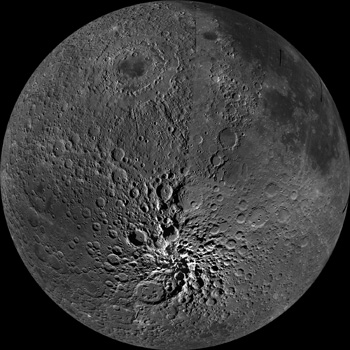 
After the orbital insertion, scientists will test the spacecraft systems to make sure that all the instruments are in good working order. It is important to verify that all the instruments operate well in the harsh thermal environment around Mercury (currently Mercury is only about 0.3 AU from the Sun!). On April 4, 2011, the science phase of the MESSENGER mission will begin and the orbital science data from Mercury will be returned to Earth almost every day for at least a year!

Check out the MESSENGER website to learn more about the mission goals.
› Back To Top