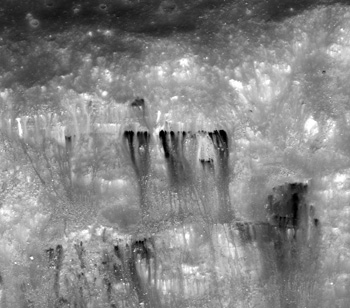 
Today's Featured Image reveals the upper slopes of Diophantus crater, located on the western edge of Mare Imbrium. The upper dark area of this image corresponds to the flat mare surface, outside of the crater. The most striking feature here is the dark material that flowed down the crater wall. The reflectance of surface materials is controlled by various factors such as sunlight direction, grain sizes and surface textures, and composition. In this picture, the dark materials are most likely a different composition (relatively bright materials also flowed down-slope next to the dark flows).

These dark features originate from several layers exposed in the crater walls. The horizontal extent of these layers is rather discontinuous and they appear at various elevations; their thickness ranges from five to ten meters. What material composes these dark slides? We know from samples returned from the Apollo 17 mission that very dark pyroclastic materials (explosive volcanics) exist on the Moon. Perhaps these slides are a layers of pyroclastics that were buried by younger lava flows. When Diophantus was formed these layers were exposed! There is much to be learned about the distribution and chemistry of pyroclastics and in turn about the deep interior of the Moon. 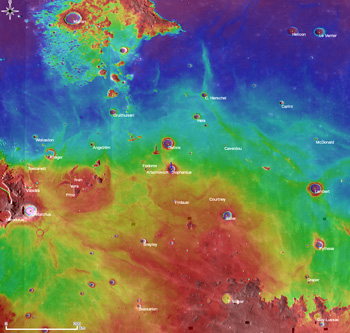