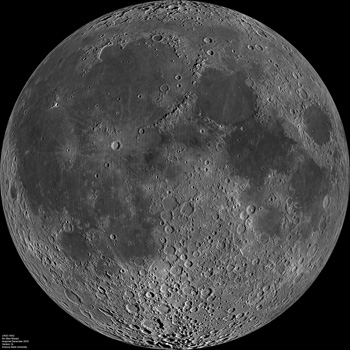 
For two weeks in mid-December 2010, the LRO spacecraft remained nadir looking (straight down) so that the LROC Wide Angle Camera (WAC) could acquire ~1300 images, allowing the LROC team to construct this spectacular mosaic. As the Moon rotated under LRO's orbit, the ground track progressed from east to west (right to left in this mosaic), and the incidence angle at the equator increased from 69° to 82° (at noontime the incidence angle is 0°). 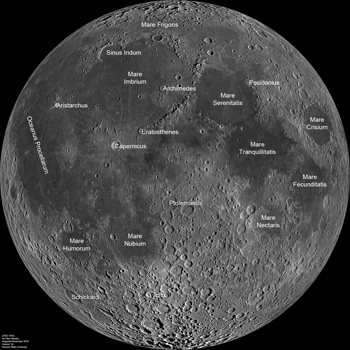 
The LROC WAC is quite small, easily fitting in your hand. It weighs in at only 900 grams (2 lbs). Despite its diminutive size, the WAC maps nearly the whole Moon every month, in 7 wavelengths. The LROC WAC was designed, built, and calibrated at Malin Space Science Systems (MSSS) in San Diego, CA. 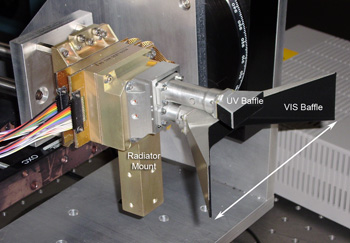 › View larger image
LROC WAC mounted on a rotation stage at the MSSS calibration facility in July of 2008. The width of the VIS baffle indicated with arrow is 15.5 cm (6.1 inches) [M. Robinson photo].


› Full-size images
http://wms.lroc.asu.edu/lroc_browse/view/wac_nearside
› Back To Top