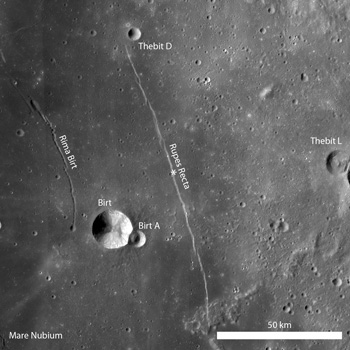 › View larger image
Rupes Recta is a well-known linear rille that extends over 100 km in length! Portion of LROC WAC monochrome mosaic, illumination is from the left, and asterisk notes location of LROC NAC (below) [NASA/GSFC/Arizona State University].


Several weeks ago LROC featured a series of WAC monochrome mosaics of some of the most spectacular sinuous rilles on the Moon (Rimae Posidonius, Vallis Schröteri, and Rimae Prinz). Unlike sinuous rilles, linear rilles (or graben) are not believed to primarily result from lunar volcanism. Linear rilles are surface manifestations of structural faulting that formed when the lunar crust was pulled apart. The widths of these linear rilles range from as little as a few meters to kilometers across; Rupes Recta is between 1 - 3 km wide across its length. In addition, Rupes Recta is composed of several en echelon segments - the linear rille is not a single, uninterrupted 100 km length fault! There are at least 5 large fault segments visible at the LROC WAC scale (100 m/pixel) that range from ~8 km to 50 km in length. 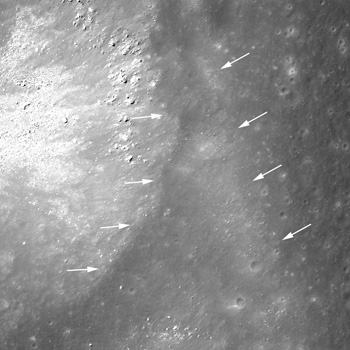 › View larger image
Cross-cutting relations between Rupes Recta and an impact crater are evident in this subset of LROC NAC image M12264663R. The cliff-face of Rupes Recta is noted by the arrows on the right side of the image. At some point after the formation of Rupes Recta, an impact occurred and excavated material from the fault wall. The arrows on the left side of the image (forming a somewhat-curvilinear path) denote the crater wall. Subsequent down-slope movement of eroded debris and blocks is visible. Image width is 840 m, illumination from the left, and the low-incidence angle of this image highlights the albedo variations [NASA/GSFC/Arizona State University].