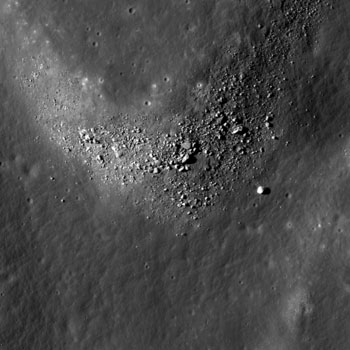 This intersection of two fractures within the crater Gassendi forms a rough "Y," with boulders concentrated on the northern wall of the intersection. NAC frame M104770486L, image width is 946 m, incidence angle is 51 degrees. Credit: NASA/GSFC/Arizona State University

The crater Gassendi is 110 km in diameter and located on the northern edge of Mare Humorum at 17.5°S, 39.9°W. Gassendi features an array of intersecting fractures on its floor, collectively known as the Rimae Gassendi. Some of the largest fractures are thousands of meters wide. The origin of these fractures in the floor of Gassendi is not known for certain. After the impact the floor of Gassendi was molten and as it cooled, a crust of solid material formed at the surface. As the entire crater floor continued to cool and settle into its final shape, fractures could have formed due to the forces caused by these changes. Other craters besides Gassendi also have fractured floors, like the craters Alphonsus or Goclenius. How do you think fractures form inside craters? What are the differences between each of these craters? 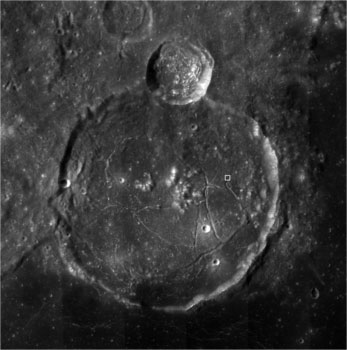