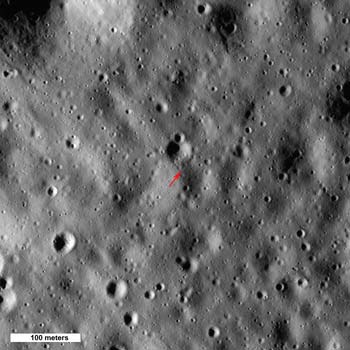 Over the course of the Lunar Reconnaissance Orbiter mission, the LOLA team has diligently watched as the highest point on the Moon got higher and higher. No, the Moon is not expanding, but rather the LOLA profile coverage increases each month so the chances increase that a ground track will pass directly over, or very near to the highest point. Once the LOLA team had the spot narrowed down to a small area, the LROC team commanded a NAC stereo pair (12 August 2010) to get an even higher resolution measurement of the elevation and coordinates of the highest point. Once the stereo pair was on the ground, the LROC team processed the images into a digital elevation model (DEM), or topographic map. 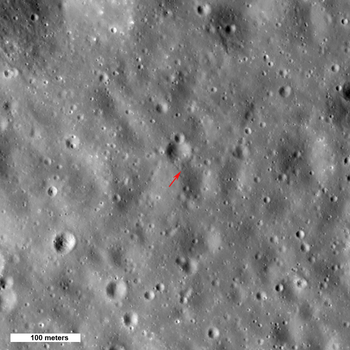 Another view of the highest point with the Sun further above the horizon (Sun angle 48°). Image is 500 meters wide, image M136226953. Credit: NASA/GSFC/Arizona State University

The highest point on the Earth is at the summit of Mount Everest, which is 8,848 meters (29,029 feet) above sea level. The lunar high point is 1938 meters higher than that of the Earth! However there are several major differences between the two points. Mt Everest is a relatively new feature on the Earth. It was formed as tectonic plates collided and pushed up to astonishing heights what was once seafloor, over the course of about 60 million years. The lunar high point is very ancient, and was possibly formed as ejecta from the enormous South Pole Aitken basin piled up during this cataclysmic event, in a matter of minutes, more than 4 billion years ago. Another key difference between the two highest points is slope. The flanks of Mt Everest are very steep, while on the Moon the approach to the summit has slopes of only about 3°, assuming you skirt around impact craters. This difference is due to the two very different formation mechanisms. 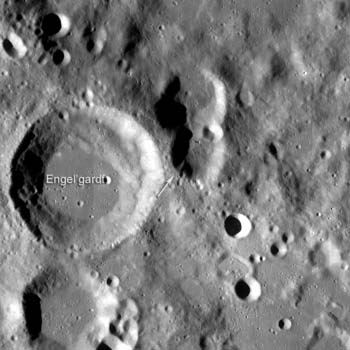 As the LRO mission progresses, knowledge of the spacecraft position improves so the accuracy of the elevation and coordinates (latitude 5.4125°, longitude 201.3665°, 10,786 meters) of the highest point will improve a small amount.

The highest point is near sample 5,654 and line 29,939 in the full resolution Explore all of LRO's incredible images at the LRO site at Arizona State University.
› Back To Top