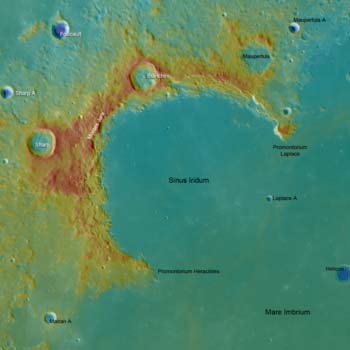 Wow - five spacecraft launched to the Moon in three years! The latest is China's second lunar orbiter, Chang'e 2, which was launched 1 October 2010 and arrived at the Moon on 6 October. Chang'e 2 carries a higher resolution camera than Chang'e 1 that may help Chinese scientists scout out the proposed landing site for their upcoming lander/rover, Chang'e 3. Currently the Chinese lander is slated to land in Sinus Iridum (Bay of Rainbows) sometime before 2013. Why Sinus Iridum? The WAC topographic map shows the area to be very flat and nearly featureless. However as the LROC Narrow Angle Camera (NAC) keeps showing us, there are no featureless spots on the Moon - everywhere on the Moon is fascinating! 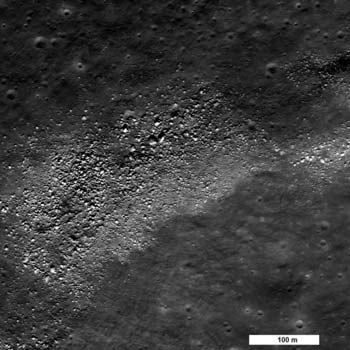 Boulders resting on the top of a wrinkle ridge in the middle of Sinus Iridum. Where did they come from? LROC NAC M124749832R. Credit: NASA/GSFC/Arizona State University

Sinus Iridum is a mare-filled impact crater that superposes the Imbrium basin. It is far from any Apollo landing sites, with the closest (Apollo 15) being more than 1000 km distant. Scientists would love to have a look at the chemistry of these basalts - how much do they differ from the Apollo 15 basalts which are from the other side of Imbrium? Wrinkle ridges cross the mare, and in places families of boulders are perched on the ridges. Are the boulders weathering out of the ridge? Many small irregular shaped craters dots Sinus Iridum, how were they formed? The LROC team will post selected NACs over the coming weeks, you can join the effort to explore this future landing site now!