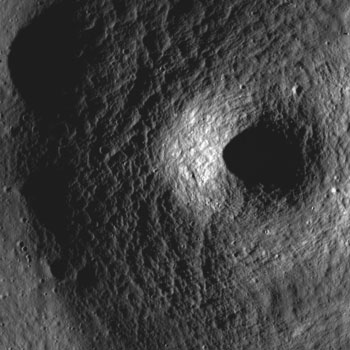 > View larger image
Most of the craters on the Moon formed through impact processes. However, some craters, like the one visible in this portion of LROC NAC frame M131488521R, may be a volcano summit pit crater. Crater diameter is ~400 m, the image width is 923 m, and illumination is from the right. Credit: NASA/GSFC/Arizona State University

When most people think about volcanism on the Moon, they usually consider the vast mare basalts located primarily on the lunar near side. However, there are many different volcanic features on the Moon. Sinuous rilles, mare domes, non-mare domes, and pyroclastic deposits are several volcanic features that the LROC NAC studies at 0.50 m/pixel. The opening image in today's Featured Image is an exciting view of what may be the pit crater at the summit of a small volcano. These features which may be similar to terrestrial cinder or scoria cones. In contrast to lunar volcanoes, such as mare domes, this pair of volcanoes is much smaller - they are only ~1.5 km across the widest portion of their bases (very small by lunar standards). 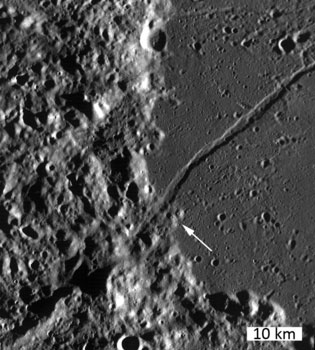 > View larger image
Portion of LROC WAC M11616690M, centered on the highlands-Lacus Mortis mare contact. The arrow points to two probable volcanic features, each of which are ~1.5 km across at their widest point. Northward of these features is a linear rille that can be traced into the highlands, where it appears to transform into a ridge. Credit: NASA/GSFC/Arizona State University

Investigators during the Apollo years suggested that volcanic features like domes could be present in this region; with the tremendous capability of the LROC instruments, we can now take a closer look and begin to ascertain if this is indeed the case. Located at the highlands-mare boundary, these two features appear to be volcanic in origin and also isolated from other volcanic features (besides the mare) - other regions with prominent volcanoes exhibit several domes within close proximity to one another. So, why are there only two features here, which we interpret to be volcanic in origin? We can't really answer that question with just a single LROC NAC image pair and an LROC WAC monochrome context image of the immediate area. Instead, we need an LROC WAC mosaic that provides a regional view of Lacus Mortis so that any other volcanic or dome-like features can be observed. Additionally, when the LROC team discovers new features we can target a stereo observation and make detailed topographic maps to help scientists better understand a features origin. Once a detailed study of the presence, locations, sizes, and forms of any other similar volcanic features are identified in Lacus Mortis, we can begin to assess these geologic features and hypothesize to their origins. For example, in the immediate vicinity shown in the LROC WAC monochrome context image, there is a linear rille (or graben) cutting through the mare, transitioning into a ridge in the highlands. Maybe this tectonic feature has something to do with the volcanic feature? From the LROC WAC frame we cannot distinguish relative ages between the volcanic features and rille, so determining the relationship between these features (if any) remains a mystery (at this time).