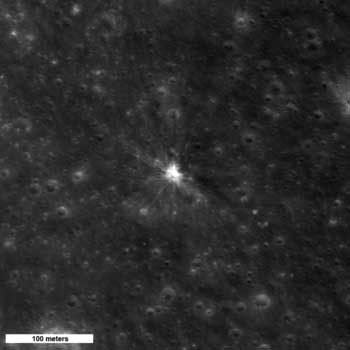 New impact crater on the Moon! Since this crater is not visible in images from the Apollo 15 mission, it formed sometime in the last 38 years. The new crater is only ~10 meters (30 feet) across, but its bright ejecta extends much farther, making it stand out from all the nearby craters. LROC NAC image M108971316L; view is 400 m across. Credit: NASA/GSFC/Arizona State University

By comparing photographs from past eras of lunar exploration with the high resolution data being returned by the Lunar Reconnaissance Orbiter Narrow Angle Camera, we can identify new craters that have formed in the last four decades. In this case, bright ejecta and rays extend from an impact site that is not present in the previous image from the Apollo 15 panoramic camera. 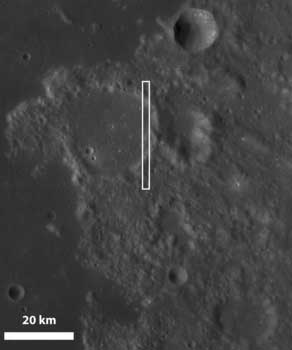 The Apollo image (AS15-9527) was taken in August 1971 with the sun 64° above the horizon. The LROC image (M108971316L) was taken September 30, 2009 when the sun was 72° above the horizon. Images taken under similar lighting conditions like these are the most useful for identifying and comparing surface features. Using these two images as "before" and "after" views, we can conclude that a natural object (asteroid or comet) about 0.5 m (~20 inches) in diameter must have impacted the Moon here within the last 38 years. Note that this location (16.92° N latitude, 40.50° E longitude) does not correspond to a known impact site for past spacecraft, nor is it near any of the Apollo landing sites, where the Lunar Module ascent stages impacted and created craters. 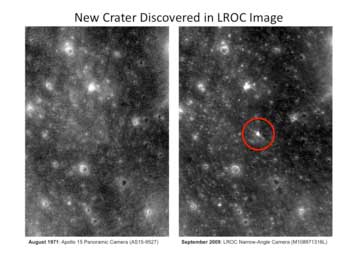 > View larger image
Comparisons by the LROC Science Team of images from the Apollo Panoramic Camera and the LROC Narrow Angle Camera will reveal impact craters that have formed within the past 38 years. Credit: NASA/GSFC/Arizona State University

The impact exposed fresh material from underneath the surface. Rays of this bright material extend far outward from the central crater, helping us to clearly identify it. The rays are actually more than 3x more reflective than the underlying basalts! Thus, even though the crater itself is only ~10 meters (30 feet) across, the bright markings would have been prominent in the high-sun Apollo image if the crater had existed in 1971.

Discoveries of recent, datable impact craters like these establish the present-day impact cratering rate on the Moon, which will lead to better understanding of the bombardment rate in the inner solar system. Meteorites of this size are a potential hazard to future explorers on the Moon or anywhere in the inner Solar System where there is no shielding atmosphere. If we have a better sense of the current impact rate for this size of impactor, we can more effectively design habitats and hardware to protect human explorers. A crater this young has also not been modified by other processes, so we can study the appearance of features we know are extremely fresh. In addition, since ages are estimated using the number of craters present on planetary surfaces, knowing how many craters are currently being produced will improve our understanding of the geologic history of the Moon, Mars, and other planets. In particular, we must rely on small craters like this to date small areas and/or geologically recent terrains.

> Web page on the LROC web site
› Back To Top