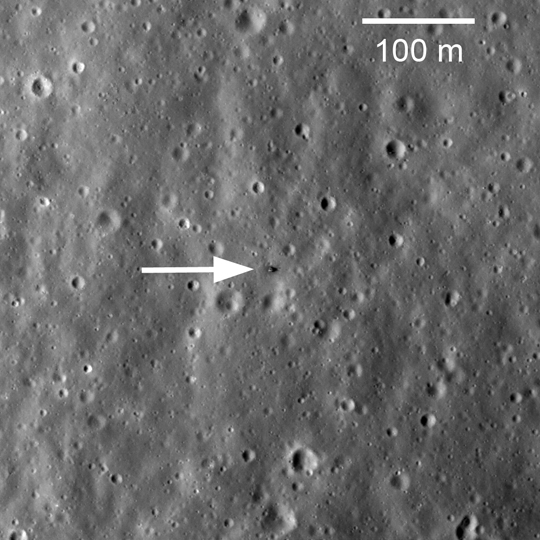 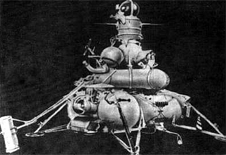 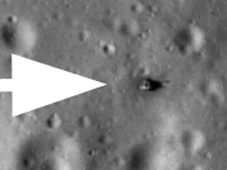 Enlargement of Luna 20 descent stage. Note the shadow of the sampling arm. Credit: NASA/Goddard/Arizona State University The Soviet Union successfully executed three robotic sample return missions as part of the Cold War competition with the United States. The first mission, Luna 16, returned a small sample (101 grams) from Mare Fecunditatis in September of 1970, a time between the US Apollo 12 and 14 manned landings. A year and half later (February 1972) Luna 20 returned 55 grams of soil from the Apollonius highlands region.

Luna 16 and 20 were very similar in design and sampling method. A drill at the end of the sampling arm collected soil from a few tens of cm below the surface. The arm then placed the sample into the return capsule on top of the vehicle. The distinctive shadow seen in the LROC image of Luna 20 is most likely that of the sampling arm. The Luna 20 sample contained minerals similar to those sampled by the US Apollo 16 astronauts two months later from the Cayley plains (8°58"S, 15°30"E).

In October of 1974 Luna 23 set down on Mare Crisium, however technical difficulties prevented it from successfully acquiring a sample. Undeterred, the Soviets tried again in August of 1976, this time with much better luck. Luna 24 was designed to auger over 2 meters into the lunar soil thus collecting a better section and a larger sample, 170 grams. The positions of Luna 23 and 24 were not well constrained and are reported as within several hundred meters of each other. From the new NAC images we can accurately measure the distance between the two landers to be about 2400 meters. However the absolute position of the landers is only know to about 500 meters accuracy. As the LRO mission ephemeris improves, the Luna absolute positions should be known to better than 100 meters. Scroll around in a mosaic of two NAC high Sun images (M111185087L,R) and find Luna 23 and Luna 24. Look for a few very bright pixels near Luna 24; they may be small pieces of material blown off the descent stage as the ascent staged blasted off towards Earth. 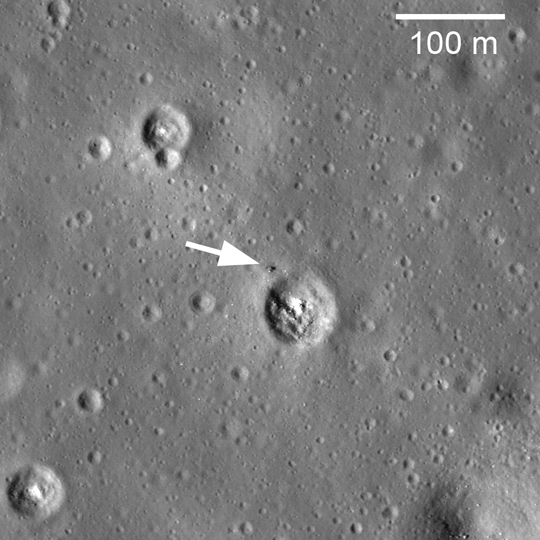 The successful Soviet Luna sample return missions returned small, but important, samples from three locations on the Moon. In this new era of lunar exploration several countries plan to soft land on the Moon in the near future, the first soft-landed spacecraft since Luna 24. India and Russia plan to launch a lander and rover called Chandrayaan 2 in 2013. The Chinese Chang'e lunar exploration program also plans a soft landing in 2013.