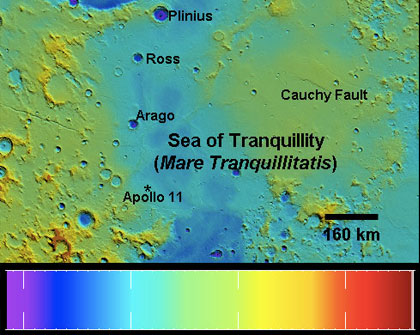 5.28.2010 - The Sea of Tranquility has long captivated astronomers. Once thought to be an ocean on the Moon, its relatively smooth fields of basaltic lavas and equatorial position made it an ideal location for the first manned lunar landing. On July 20, 1969 Neil Armstrong and Buzz Aldrin left the first human footprints on the Moon near the southwestern shores of Mare Tranquillitatis.

Mare Tranquillitatis (approximately 873 km in diameter) lies in the Tranquillitatis basin (centered on 0.68 N, 23.43 E; extending, roughly, from 20.4 N-4.4 S, 15.0-45.9 E). This basin is thought to have been formed as a result of a very large impact in the Moon's early history, likely more than 3.9 billion years ago. The crater was then flooded with mare basalts, making it appear dark when viewed from Earth, and making it smooth and relatively flat, as seen in LOLA data. There is only a little over a 500 m elevation difference between the highest and lowest points within the mare, excluding overprinted craters. The mare has an irregular margin because several basins, including Serenitatis and Nectaris, intersect in this region. See if you can find other features surrounding Mare Tranquillitatis on a map of the Moon.

For other information and exploration news, check out one of Science@NASA's Apollo Chronicles featuring Neil Armstrong and Buzz Aldrin's experience in the Sea of Tranquility, the featured LROC images of a wrinkle ridge in the Mare Tranquillitatis Constellation Region of Interest, and the Apollo landing sites.