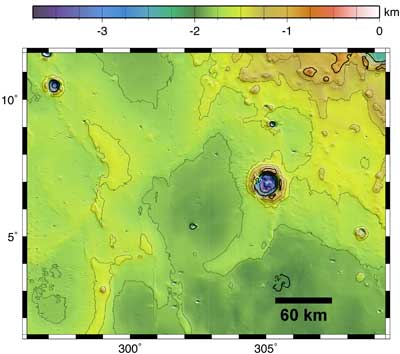 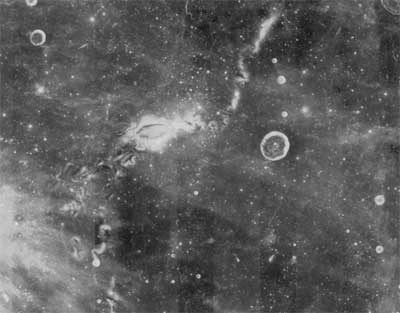 The Reiner Gamma region on the lunar nearside (7.5 N, 301.4 E) has an unusual surface feature called a “lunar swirl.” Visible in the Clementine 750-nm mosaic image shown here, it resembles a swirl of cream in a mug of hot chocolate. Lunar swirls have a higher albedo than the surrounding lunar surface. The formation of lunar swirls, especially the Reiner Gamma swirl, is a mystery.

Although the Moon does not have a global magnetic field, localized magnetic fields have been observed in swirl regions. One idea is that the mini-magnetic fields have shielded the swirls from the solar wind, which can darken lunar soils over time. Two swirls on the lunar farside lie directly opposite nearside impact basins (Mare Imbrium and Mare Orientale), suggesting that their formation and that of the localized magnetic fields is related to the impacts that created the basins. Reiner Gamma does not have a corresponding impact basin on the farside. In addition, there appears to be no correlation between the Reiner Gamma swirl and its local topography. LOLA data show that the region is relatively flat. The contour interval in this image is 0.2 km.