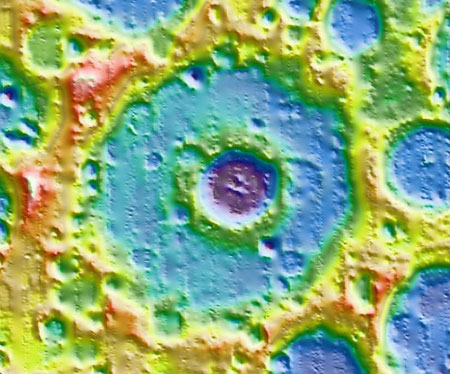 5.14.2010 - Located on the western limb of the Moon, Einstein and Einstein A craters (16.3oN, 271.3oE ) are only visible to Earth-based observers during certain lunar lighting and orientation conditions. Einstein A is younger than Einstein, as indicated by the fact that it lies squarely in the middle of the floor of Einstein. When viewed in topographic data, these two craters reveal much about the relative age and shape of an impact crater.

To understand further, let's first take a look at Einstein. Einstein is a fairly large crater that spans 198 km across. A crater's size alone however cannot reveal much about age. ÊEinstein's relative age can be determined by examining the frequency and distribution of impact craters overprinted on its rim and floor. Younger craters have had fewer impacts, which enables them to retain their original morphology. Einstein A reveals most of its original structure, including a raised rim and ejecta blanket, and is therefore a relatively young crater as compared to Einstein, whose original structure has been somewhat degraded over time by smaller impacts. The Einstein craters were named after famed physicist, philosopher, and scientist Albert Einstein (1879-1955).