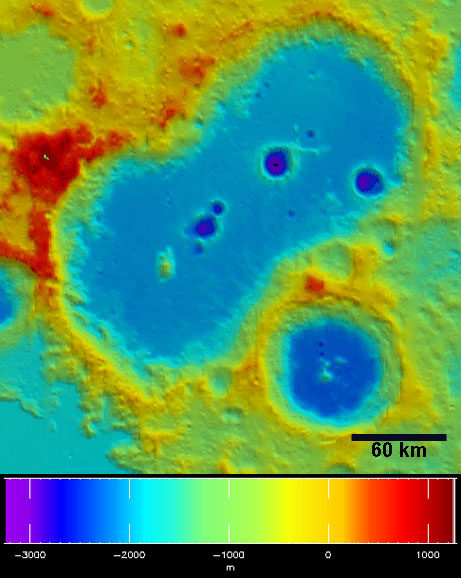 Van de Graaff Crater, located on the lunar far side north of South Pole-Aitken Basin (172.08, -26.92), has an unusual figure 8 shape (~240 km x 140 km) that has long caught the eye of lunar scientists. Its shape suggests that it was formed by two separate impacts even though there is no crater wall separating its two halves. LOLA data indicate that the floor of the crater is relatively flat except for the presence of several smaller impact craters. Portions of its rim reach almost 1000 m above lunar mean elevation level, while its floor is near – 2100 m.

Van de Graaff is a region of interest for robotic and human exploration of the Moon due to its location in a magnetically and geochemically anomalous region. The Moon does not have a global magnetic field like the Earth, thus the origin of its small, localized magnetic fields, such as the one near Van de Graaff, is of scientific interest. Van de Graaff and the surrounding region are also slightly enriched in the element thorium, an element found in lunar KREEP (potassium (K), rare earth elements (REE), and phosphorus (P)) terrain. Most of the Moon’s KREEP-rich materials are found on the lunar nearside, thus the presence of enhanced thorium in the Van de Graaff region is intriguing.