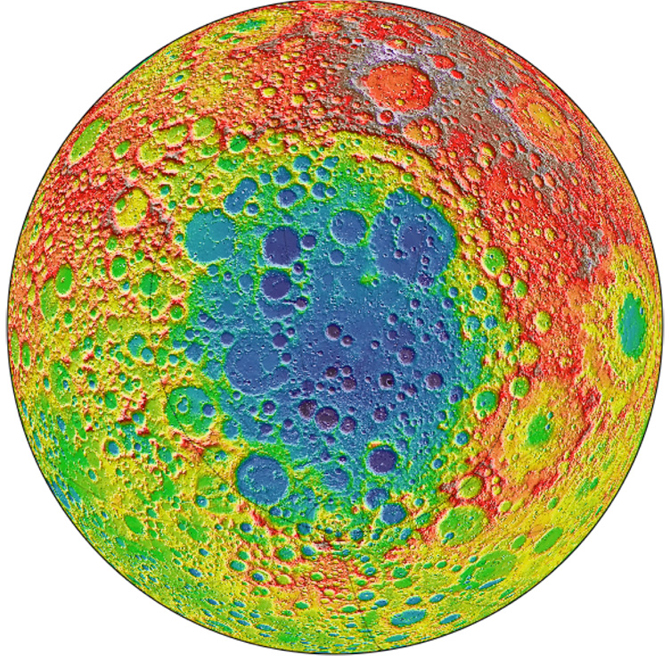 This LOLA image centers on the South Pole-Aitken (SPA) basin, the largest impact basin on the Moon (diameter = 2600 km), and one of the largest impact basins in the Solar System. The distance from its depths to the tops of the highest surrounding peaks is over 15 km, almost twice the height of Mount Everest on Earth. SPA is interesting for a number of reasons. To begin with, large impact events can remove surficial materials from local areas and bring material from beneath the impact craters to, or closer to, the surface. The larger the crater, the deeper the material that can be exposed. As SPA is the deepest impact basin on the Moon, more than 8 km (5 mi) deep, the deepest lunar crustal materials should be exposed here. In fact, the Moon's lower crust may be revealed in areas within SPA: something not found anywhere else on the Moon.

LOLA data can be used to provide topographic context for structural and mineralogical investigations of SPA. In addition to providing topographic maps of the lunar surface, LOLA data can be used to extrapolate illumination conditions within and around SPA. Several craters in this area have permanently shadowed regions that may contain deposits of hydrogen or water ice, as indicated by observations from the Lunar Exploration Neutron Detector (LEND), another instrument onboard the Lunar Reconnaissance Orbiter. Conversely, nearby areas of higher elevation are nearly constantly illuminated by the Sun. Such areas would be useful for harnessing solar energy for robotic or human exploration.