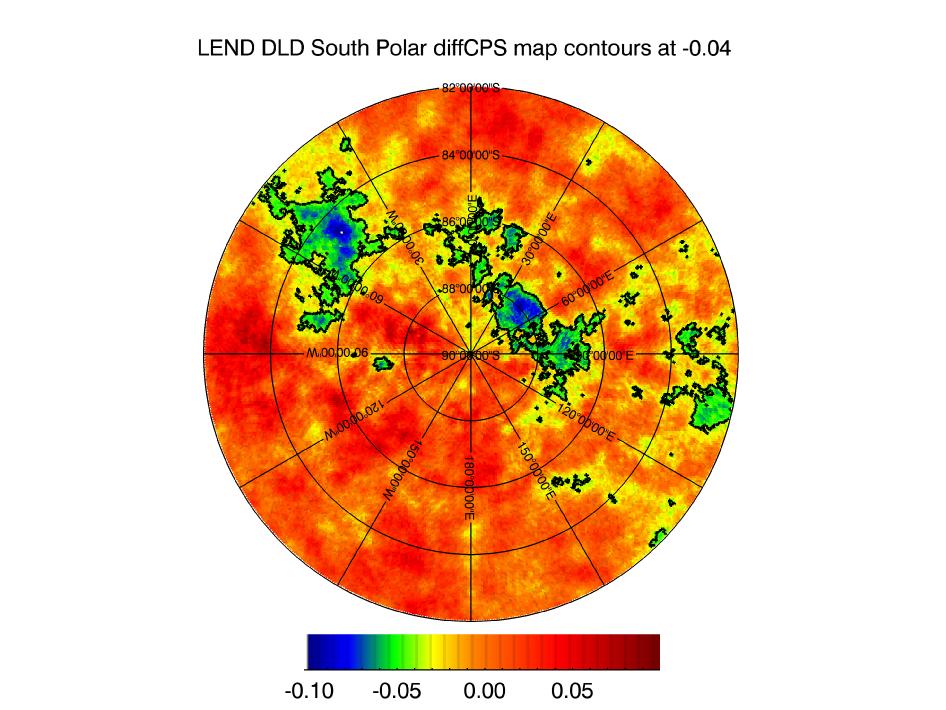 Since hydrogen is a component of water, scientists look for areas with more abundant hydrogen to search for possible deposits of water ice on the Moon. LEND can identify areas enriched in hydrogen by looking at the numbers of subatomic particles called neutrons that are constantly emitted from the lunar surface. A signature of more abundant hydrogen is a decrease in the number of neutrons moving at certain speeds, called epithermal neutrons. Fewer epithermal neutrons indicates more hydrogen.

In this map, blue represents the lowest levels of epithermal neutrons, signaling more hydrogen, while red areas have the highest neutron counts and are relatively hydrogen-poor. The map is centered on the lunar south pole with the edges reaching to 82 degrees south latitude.

Two very large areas with low numbers of epithermal neutrons, called neutron suppression regions (NSRs), correspond to the Cabeus and Shoemaker craters. The NSRs are not closely related to the permanently shadowed regions (PSRs) in the depths of these craters. This is unexpected because PSRs, found in craters near the lunar poles, were thought to hold the most water ice due to their extreme cold. The NSR at Shoemaker does follow the outline of the local PSR, but the one at Cabeus is substantially larger than the Cabeus PSR. Many other PSRs show no evidence of neutron suppression.