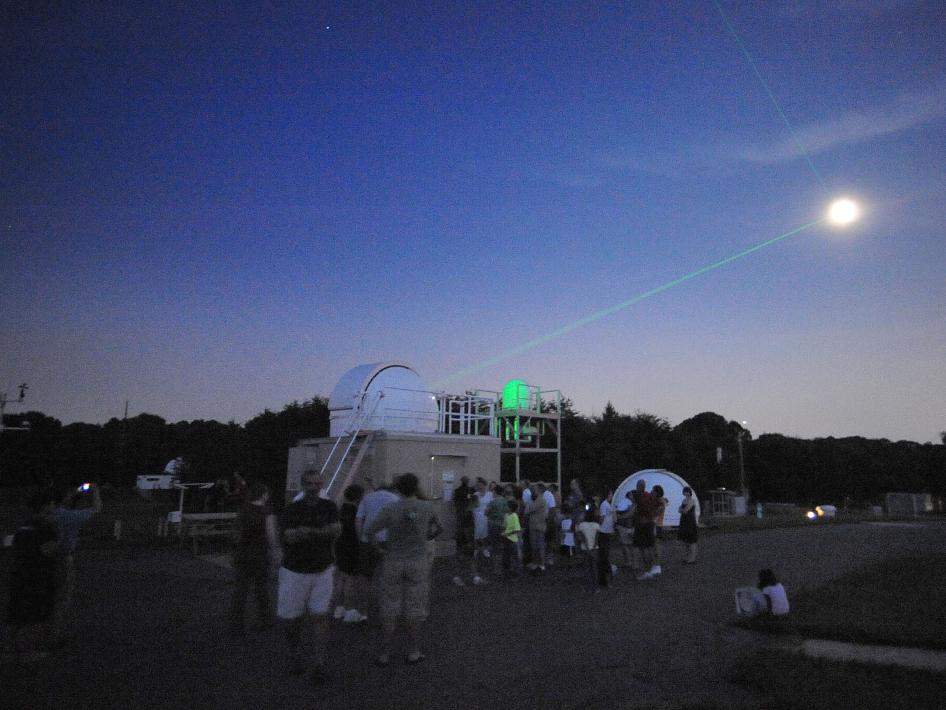 This photograph shows the Laser Ranging Facility at Goddard's Geophysical and Astronomical Observatory in Greenbelt, Md. The observatory helps NASA keep track of orbiting satellites. The lower of the two green beams is from the Lunar Reconnaissance Orbiter's dedicated tracker. The other laser, although appearing to originate from above, originates from another ground system at the facility. Both beams are pointed at the moon -- specifically at LRO in orbit of the moon -- in this photo. (Learn more about the LRO Laser Ranging system at http://lrolr.gsfc.nasa.gov/.)

The picture was taken on Aug. 1, 2009, when Goddard invited guests to celebrate LRO's successful arrival at the moon. Guests could gaze at stars and the moon through telescopes, talk with the LRO team and see new images from the satellite, among other activities. A number of hands-on activities for young children and their families provided knowledge and understanding of the phases of the moon, crater creation and the scale of the Earth/moon system.

The LRO mission, built and managed by NASA's Goddard Space Flight Center, launched on June 18, 2009. LRO will spend at least one year in low polar orbit around the moon, collecting detailed information about the lunar surface. Among other aims, LRO's objectives are to scout for safe future landing sites and locate potential resources.