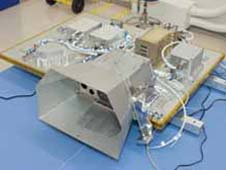 Image Right: The LCROSS science payload fully assembled and ready for shipment. Credit: NASA/Dominic Hart. After the proposal for the LCROSS mission was accepted to fly as a secondary payload to the Lunar Reconnaissance Orbiter, the LCROSS payload team conducted an extensive process to select the components for the science payload. The goal for the payload team was to collect a set of instruments that would collect data from different aspects of the Centaur impact but would be complementary to each other. This maximizes the science return for the LCROSS mission while providing redundancy and robustness.

The resulting science payload consists of a total of nine science instruments consisting of one visible, two near infrared and two mid infrared cameras; one visible and two near infrared spectrometers; and a photometer. A data handling unit collects the information for all of the instruments for transmission back to LCROSS Mission Control. Due to the schedule and budgetary constraints, the LCROSS team took full advantage of available rugged, commercially available components.

Although the selected instruments are considered rugged for their intended uses on Earth, space is a harsh environment. The LCROSS payload team put the individual instruments though a rigorous testing cycle that simulated launch and the conditions of space. The team identified design weakness and needed modifications for space use and worked with the manufacturers to strengthen there designs. The payload was assembled and put through additional tests to determine how the system worked together. Once the payload meet all testing criteria and the team was satisfied that the payload worked, it was shipped to Northrop Grumman for integration into the LCROSS spacecraft.

Instrument checkout, impact rehearsal and calibration will be performed during the initial swing-by of the Moon. One hour prior to impact instruments will be powered on and will return data until impact of the spacecraft.