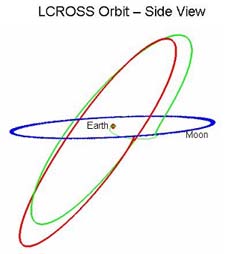 Image right: Depiction of the Lunar Gravity-Assist, Lunar Return Orbit for a lunar south pole impact. Credit: NASA To maximize the creation of a debris plume, the impacts of the Centaur rocket and the LCROSS spacecraft need sufficient speed and a high angle of impact. Engineers have estimated that the Centaur and LCROSS spacecraft will impact the lunar surface at approximately 2.5 km/s or 5,592 miles per hour. The projected angle of impact is approximately plus or minus 70 degrees depending of the targeted pole.

To achieve this high angle of impact, the LCROSS spacecraft and the Centaur will execute a fly-by of the moon approximately five days after launch entering an extended Lunar Gravity-Assist, Lunar Return Orbit (LGALRO). This long looping orbit around the Earth will allow the Lunar Reconnaissance Orbiter possibly several months to collect science data about the lunar poles after engineers check out the orbiter's systems. 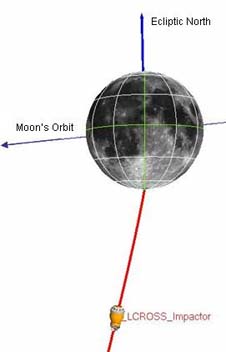