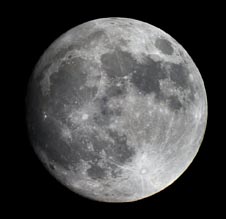 Image right: Image of the moon. Credit: NASA The moon is the most prominent object in our night sky yet more is known about Mars than the moon. What is known about the moon was gathered by Earth-based telescopes, the Apollo missions and small robotics missions. In the 1990s, two of these small robotic missions, Clementine and Lunar Prospector, found evidence of possible water ice at the lunar poles. Unfortunately, the evidence was not conclusive. The Lunar CRater Observation and Sensing Satellite (LCROSS) mission seeks a definitive answer to the question of lunar water. If water is present, it could be a valuable resource in the human quest to explore the solar system.

The main science objectives for the LCROSS mission are to:

If water is on the moon, it arrived the same way water did on Earth. Though billions of years of bombardment by meteors and comets water or the components of water were deposited on the Earth and the moon. With moon's small gravitational field in conjunction with solar radiation, any lunar water should have evaporated and drifted into space long ago. Fortunately, at the lunar poles, there are crater floors that have not seen sunlight for possibly billions of years. With temperature estimated to be near -200° C (-328° F), these craters can 'cold trap' or capture most volatiles including water.

The LCROSS mission will be the first in-situ study of these pristine permanently shadowed craters.
› Back To Top