Image above: The life cycle of a lunar impact. The LCROSS instruments are designed to collect data on the evolving impact environment. Credit: NASA 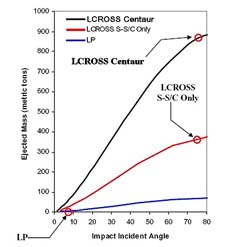 Image right: Image of the moon. Credit: NASA The primary goal of LCROSS is to measure the concentration of water ice (ice to dust ratio) in permanently shadowed lunar regolith or soil. When the approximately 2000 kg Centaur impacts a permanently shadowed crater at 2.5 km/s, there is an initial flash followed by the creation of a debris blanket and plume. If water ice is present on the floor of the crater, it will be thrown skyward. Once above the crater rim, it will be exposed to solar radiation breaking the molecules of water into hydrogen ions (H+) and hydroxyl ions (OH-). The LCROSS spacecraft following four minutes behind will collect and transmit data back to LCROSS mission control about the debris plume using the nine on-board science instruments before impacting the surface. A possible result of the impact is the creation of a temporary thin atmosphere of hydroxyl ions. This resulting atmosphere could be detectable using telescopes on and orbiting the Earth and satellites in lunar orbit. 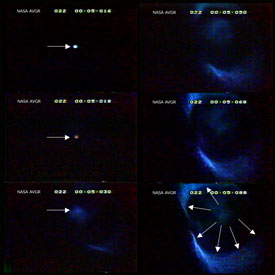 Image right: A sequence "grab" from a high-speed video taken at the NASA Ames Vertical Gun Range. The images show the initial flash and the gradual appearance of the simulated lunar ejecta as they emerge into the 'sunlight'. Sequence courtesy of LCROSS team member P.H. Schultz, Brown University, Providence, R.I. Click on the image to download high resolution photo.

Images and information about impact studies conducted at the Ames Vertical Run Range.
› Back To Top