Learn more about LCROSS' technology and methods for water detection at the LCROSS Project site. 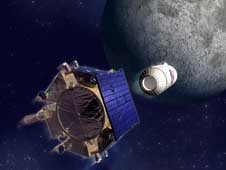 Image above: Artist's rendering of the LCROSS spacecraft and Centaur separation. Click image to enlarge Credit: NASA Earth’s closest neighbor is holding a secret. In 1999, hints of that secret were revealed in the form of concentrated hydrogen signatures detected in permanently shadowed craters at the lunar poles by NASA’s Lunar Prospector. These readings may be an indication of lunar water and could have far-reaching implications as humans expand exploration past low-Earth orbit. The Lunar CRater Observing and Sensing Satellite (LCROSS) mission is seeking a definitive answer.

In April 2006, NASA selected the LCROSS proposal for a low-cost, fast-track companion mission to the Lunar Reconnaissance Orbiter (LRO). The main LCROSS mission objective is to confirm the presence or absence of water ice in a permanently shadowed crater near a lunar polar region.

LCROSS launched with the Lunar Reconnaissance Orbiter (LRO) aboard an Atlas V rocket from Cape Canaveral, Fla., on June 18, 2009 at 2:32 p.m. PDT. The LCROSS shepherding spacecraft and the Atlas V’s Centaur upper stage rocket executed a fly-by of the moon on June 23, 2009 (LCROSS lunar swingby video stream coverage) and entered into an elongated Earth orbit to position LCROSS for impact on a lunar pole. On final approach, the shepherding spacecraft and Centaur will separate. The Centaur will act as a heavy impactor to create a debris plume that will rise above the lunar surface. Projected impact at the lunar South Pole is currently: Oct 9, 2009 at 4:30 a.m. PDT. Following four minutes behind, the shepherding spacecraft will fly through the debris plume, collecting and relaying data back to Earth before impacting the lunar surface and creating a second debris plume.

The debris plumes are expected to be visible from Earth- and space-based telescopes 10-to-12 inches and larger.

As the ejecta rises above the target crater’s rim and is exposed to sunlight, any water-ice, hydrocarbons or organics will vaporize and break down into their basic components. These components primarily will be monitored by the visible and infrared spectrometers. The near-infrared and mid-infrared cameras will determine the total amount and distribution of water in the debris plume. The spacecraft’s visible camera will track the impact location and the behavior of the debris plume while the visible radiometer will measure the flash created by the Centaur impact.

NASA’s Ames Research Center, Moffett Field, Calif., is overseeing the development of the LCROSS mission with its spacecraft and integration partner, Northrop Grumman, Redondo Beach, Calif. LCROSS is a fast-paced, low-cost, mission that will leverage some existing NASA systems, commercial-off-the-shelf components, the spacecraft expertise of Northrop Grumman and experience gained during the Lunar Prospector Mission in 1999. Ames is managing the mission, conducting mission operations, and developing the payload instruments, while Northrop Grumman designed and is building the spacecraft for this innovative mission. Ames mission scientists will spearhead the data analysis.