Grow Text SizeShrink Text Size
Waiter, There's Metal in My Moon Water
Bring a filter if you plan on drinking water from the moon. Water ice recently discovered in dust at the bottom of a crater near the moon's south pole is accompanied by metallic elements like mercury, magnesium, calcium, and even a bit of silver. Now you can add sodium to the mix, according to Dr. Rosemary Killen of NASA's Goddard Space Flight Center in Greenbelt, Md.

Recent discoveries of significant deposits of water on the moon were surprising because our moon has had a tough life. Intense asteroid bombardments in its youth, coupled with its weak gravity and the Sun's powerful radiation, have left the moon with almost no atmosphere. This rendered the lunar surface barren and dry, compared to Earth.

However, due to the moon's orientation to the Sun, scientists theorized that deep craters at the lunar poles would be in permanent shadow and thus extremely cold, and able to trap volatile material like water as ice if such material were somehow transported there, perhaps by comet impacts or chemical reactions with hydrogen, a major component of the solar wind.

The October 9, 2009 impact of NASA's Lunar CRater Observation and Sensing Satellite (LCROSS) spacecraft into the permanently shadowed region of the Cabeus crater confirmed that a surprisingly large amount of water ice exists in this region, along with small amounts of many other elements, including metallic ones. 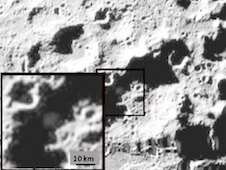 The LCROSS visible camera image showing the ejecta plume at about 20 seconds after the Centaur impact. Credit: NASA

LCROSS was launched June 18, 2009 as a companion mission to NASA's Lunar Reconnaissance Orbiter, or LRO, from NASA's Kennedy Space Center in Florida. After separating from LRO, the LCROSS spacecraft held onto the spent Centaur upper stage rocket of the launch vehicle, executed a lunar swingby, and entered into a series of long looping orbits around Earth.

After traveling approximately 113 days and nearly 5.6 million miles (9 million km), the Centaur and LCROSS separated on final approach to the moon. Moving faster than most rifle bullets, the Centaur impacted the lunar surface with LCROSS and LRO watching using their onboard instruments. Approximately four minutes of data were collected by LCROSS before the spacecraft itself impacted the lunar surface.

Killen and her team observed the LCROSS impacts with the National Solar Observatory's McMath-Pierce solar telescope at the Kitt Peak National Observatory, Tucson, Ariz. They were the only team able to see the results of the impacts from the ground.

The impacts vaporized volatile material from the bottom of Cabeus crater, including water and sodium. After the vapor plume rose about 800 meters (around 2,600 feet) – high enough to clear the shadow from the crater rim -- sunlight stimulated the sodium atoms, causing them to emit their signature yellow-orange glow. A high-resolution Echelle spectrometer attached to the telescope detected this unique glow. The instrument separates light into its component colors to identify materials by the characteristic colors they emit when energized by radiation or other events in space. 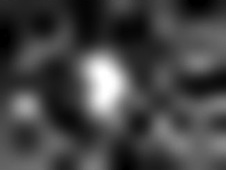 A flash of infrared light from sodium vapor released at the Centaur impact site, detected with the LCROSS mid infrared camera. Credit: NASA

The spectrometer views the sky through a narrow slit to separate the colors, so the team had to make assumptions about the shape and temperature of the plume to estimate the total amount of sodium liberated by the impacts. Using a computer model of the impact and other data on the impacts from instruments on LCROSS and LRO to guide their assumptions, the team calculated that about one to two kilograms (about 2.2 to 4.4 pounds) of sodium were released. "This is one to two percent of the amount of water released by the impacts," said Killen. "Our oceans have a comparable sodium to water ratio – about one percent." (The amount of sodium derived from the observations depends on the assumed temperature of the vapor.)

This much sodium raises the question: where did it all come from? Sodium atoms from comet impacts could bounce across the lunar surface until they landed in the permanently shadowed regions, where they would get "cold trapped" -- frozen in place. The solar wind carries small amounts of sodium, which could become embedded in the lunar surface, and it might also liberate sodium from lunar rocks, which are about 0.4 percent sodium. Sodium is also liberated from lunar rocks by meteoroid impacts. (The LCROSS impacts didn't have enough energy to vaporize rock, so it's unlikely the sodium vapor plume simply came from rocks at the impact site, according to Killen.)

"Two percent sodium to water is consistent with the amount of sodium in comets, so perhaps the bulk of the sodium and water came from comet impacts," said Killen. She makes it clear that this is just speculation at this point, and that it's possible they came from a different source or even a variety of sources, including cold-trapped lunar volatiles and solar-wind-induced chemistry. Better evidence for a cometary origin would come from an analysis of the hydrogen isotopes in lunar water, according to Killen.

Isotopes are versions of an element with different weights, or masses. For example, a deuterium atom is a heavier version of a common hydrogen atom because it has an extra particle – a neutron – in its nucleus at the center. Deuterium can be substituted for the regular form of hydrogen in a water molecule, but it is much less common than hydrogen, and its concentration varies in objects across the solar system. If the deuterium to hydrogen ratio in lunar water is similar to the ratio in comets, it would suggest the water came from comet impacts. Since comets as "dirty snowballs" carry many other materials, it would imply that much of the sodium and other volatiles came from comets as well.

The team plans to shed light on the origin of lunar water and other volatiles using data from the upcoming Lunar Atmosphere and Dust Environment Explorer (LADEE) mission, scheduled to be launched in May, 2013. The mission will orbit the moon and observe its tenuous atmosphere (technically called an exosphere, because it is so thin, atoms rarely collide with each other above the surface).

The research was funded by NASA's Dynamic Response of the Environment At the Moon (DREAM) project. "This discovery highlights a particular value of the DREAM program – we can rapidly support missions like the LCROSS impact with additional observations and analysis," said Dr. William Farrell of NASA Goddard, lead of the DREAM institute.

The McMath-Pierce telescope is operated by the National Solar Observatory, which is funded by the National Science Foundation and managed by the Association of Universities for Research in Astronomy. Killen's paper on this research was published in Geophysical Research Letters in December 2010.