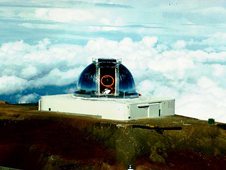 The Lunar Crater Observation and Sensing Satellite (LCROSS) Observation Campaign is seeking assistance from amateurs to develop a library of digital images of the lunar poles under varying phase and librations.

On Thursday and Friday nights of this of week, Nov. 6-7 or 7-8, 2008 depending on your time zone, members of the LCROSS science team will be observing the poles of the moon in preparation for the LCROSS impacts. From 18:00-24:00 Hawaii Standard Time, or 04:00-10:00 Universal Time (UTC), the lunar phase and the libration, or wobble of the moon about its axis, will be favorable for observing Faustini crater at the lunar south pole.

With a scheduled launch date of Apr. 24, 2009, the current plan is to impact the north pole during the August-September time frame. If the target pole changes to the south pole, Faustini crater becomes a favorable candidate crater for the LCROSS impacts. The floor of Faustini is believed to be older and probably possesses a fine-grained regolith (soil) that is more easily lofted into sunlight as opposed to a rocky-bottomed crater floor.

To prepare for the LCROSS impacts of a permanently shadowed crater, NASA Ames Research Center scientist Diane Wooden is developing targeting protocols for the moderately sized three-meter diameter NASA Infrared Telescope Facility (IRTF) atop Mauna Kea on the Big Island of Hawaii. On the night of the LCROSS impacts, Wooden and her colleagues plan to obtain spectroscopy of the LCROSS impact ejecta clouds.

Most large telescopes do not routinely observe the moon. Since the moon is extremely bright and moving very fast, compared to the background stars, special procedures are necessary to point and track accurately. Positioning of the telescope is critical to capturing the LCROSS impact events.

To ensure that the scattered light of the ejecta cloud enter the spectrometer's entrance slit, the positioning of the telescope needs to be accurate to approximately 0.5 arc seconds. Most moderate to large telescopes have positioning uncertainties larger than this and rely on nearby guide stars to improve their pointing accuracies. However, for the moon, guide stars are not practical. Instead, Wooden and her colleagues need to point to recognizable craters near the poles and offset to the position of the impacts. This requires pre-impact training exercises, such as the one planned this week.

Amateur astronomers are encouraged to image the north and south poles of the moon. The goal is to obtain images that determine the scale of recognizable features observed in the wider field of view on amateur telescopes when compared the higher spatial resolution near-infrared IRTF images. A secondary goal is to compare the dynamic range of images to allow the verification of detection of subtle variations in topography and albedo. This exercise also may help amateur astronomers prepare for obtaining images of the impact plumes. The impact plumes will occur in shadowed regions, but these shadowed regions likely will be adjacent to lit regions of the moon.

The LCROSS mission plans to impact the moon when the lunar phase is approximately between 76 degrees and 150 degrees and between 210 and 284 degrees. This avoids the few days surrounding a full moon when the moon’s brightness probably will hamper large telescopic observations. These phases also provide sun avoidance for space-based telescopes, such as the Hubble Space Telescope. Moreover, the shadowing conditions at the planned lunar phases favor identification of small features. At full moon, these features may be more easily confused with albedo variations, rather than surface topography.

The coordinates for preferred locations for LCROSS impacts within permanently shadowed craters, as of October 2008, are given below. Crater A and F are in the north polar region and Faustini and Shoemaker are in the south polar region. Cabeus at 84.9 S, 324.5 E is no longer included as a preferred impact location.

Amateur astronomers have the opportunity to create a useful reference imaging data set for the LCROSS impact. They can be helpful in the development of an amateur astronomer atlas of the lunar poles at different lighting and libration conditions. Images taken under different phases produce subtle shifts in crater shadows that affect determination of "crater centers" in images. This can affect the determinations in the offsets between these reference craters and a target crater. Furthermore, images taken during phases on the opposite side of full moon may reveal subtle features that are useful in refining the pointing accuracy.

Observations by amateur astronomers will help refine new protocols for observing the moon and increase knowledge about the moon.

For more information about the LCROSS Observation Campaign, visit:

For a library of photographic images of the moon, visit: