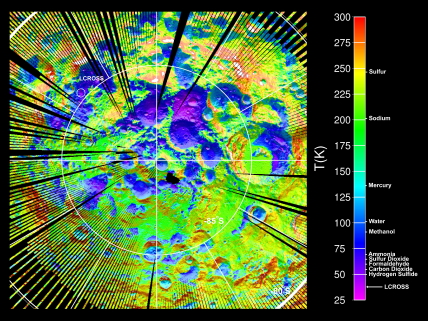 Click image to enlarge.
LRO Diviner Lunar Radiometer Experiment surface temperature map of the south polar region of the moon. The data were acquired during September and October 2009 when south polar temperatures were close to their annual maximum values. The map shows the locations of several intensely cold impact craters that are potential cold traps for water ice as well as a range of other icy compounds commonly observed in comets. The approximate maximum temperatures at which these compounds would be frozen in place for more than a billion years is shown next to the scale on the right. The LCROSS spacecraft was targeted to impact one of the coldest of these craters, and many of these compounds were observed in the ejecta plume.
Image credit: UCLA/NASA/Jet Propulsion Laboratory, Pasadena, Calif./Goddard

Click image to play video.
LRO-based map of the south pole of the moon. The high-resolution topography of the landscape is produced from the Lunar Orbiter Laser Altimeter (LOLA) altimetry data; David Smith, LOLA principal investigator (PI) at MIT and Maria T. Zuber, deputy PI at MIT. The color levels represent the intensity of local neutron emissions according to the LEND data.
Video credit: Institute for Space Research, Moscow/NASA/Goddard. The video is produced by LEND team members William Boynton and Gerard Droege at the University of Arizona, with contributions from the LOLA and LEND science teams.


Mike Wargo (no images)
Transition from observations to interpretation

Click image to play video.
The LCROSS observations were made from the shepherding spacecraft, which followed the Centaur rocket stage into the lunar south pole crater Cabeus. The Centaur impacted the floor of Cabeus at a speed of 1.5 miles/sec sending out a cloud of vapor and lifting a debris cloud more than six miles above the surface. Instruments monitored the impact and made measurements of the vapor and dust clouds. After approximately 3.5 minutes the shepherding spacecraft entered the remnants the impact debris cloud and made the first observations of the floor of Cabeus, including the still hot crater created by the impact of the Centaur.
Video credit: NASA/Ames, Roger Arno

Click image to play video.
The first figure shows the total radiance (total light) seen by the ultraviolet-visual and near infared spectrometers on LCROSS, which monitored the light scattering from the impact debris cloud, as a function of time relative to impact. The time of impact can be seen by the increasing level of light as dust makes its way into sunlight, reaching its brightest point at about 20-30 seconds after impact.
The next image show the debris cloud in the visible camera at approximately 20 seconds after impact. At this time, the debris cloud is approximately six miles across filling the spectrometer fields of view.
The next series of images shows how data from the near infrared spectrometer can be analyzed by modeling various compounds to the data. The first compound included is water ice, followed by water vapor. Other compounds shown in this example include hydroxyl and sulfur dioxide and methane. The next image show another example of a data showing strong water ice features.
The last frame provides a table summarizing the estimates of water vapor, ice and impact debris cloud mass in the spectrometers fields of view, and the resulting estimate of water fraction in the debris cloud. It is this analysis that returns an average concentration of water equal to 5.6% in the soil at the Centaur impact site.
Video credit: NASA/Ames 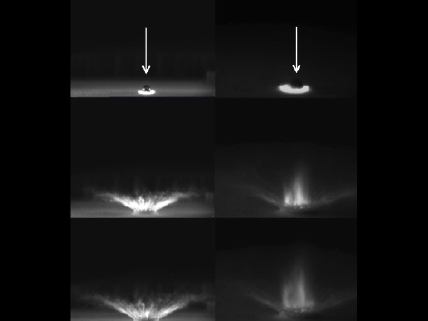 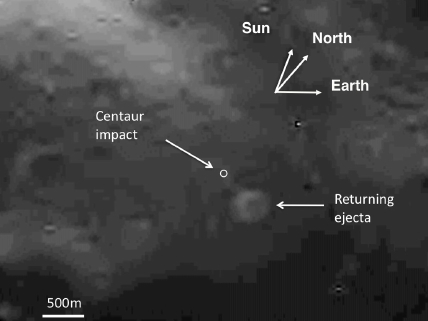 Click image to enlarge.
Just before the LCROSS spacecraft slammed into Cabeus Crater, it snapped several images of the lunar surface. Sunlight reflected off the wall of Cabeus provided just enough light to see the surface. A diffuse cloud near the point of impact by the Centaur is interpreted as very high-angle ejecta falling back to the surface. Arrows indicate the direction to the sun, Earth and north.
Image credit: Brown University/Peter H. Schultz and Brendan Hermalyn, NASA/Ames Vertical Gun Range.

Click to play video.
This animation shows the relative positions of LRO and LCROSS just before impact, and zooms in to follow LRO and show the data obtained by the LRO’s LAMP spectrograph as it stared at the sky just above the moon’s horizon. At about 45 seconds after the impact, the sunlit LCROSS plume passed in front of the LAMP slit and was observed at several different ultraviolet wavelengths. Most of the plume materials seen by LAMP must have been ejected at 1.9 km/second to have been seen so quickly. By subtracting off the emissions seen while looking in the same direction on LRO’s previous orbit, the background sky emissions due to stars are removed very effectively, so that only the LCROSS plume emissions remain. Emissions in the wavelength range 130-170 nm are due to fluorescence of sunlight by molecular hydrogen and carbon monoxide in the plume; emissions in the wavelength range 180-190 nm are mostly due to resonantly scattered sunlight by atomic mercury in the plume - with minor contributions from calcium and magnesium. These materials each likely contribute on the order of 1% or so to the mass of the permanently shaded soil excavated by the impact.
Video credit: NASA/Goddard/LAMP

Click image to play video.
The simulated evolution of the vapor cloud of molecular hydrogen from the impact of LCROSS into the southern polar region of the moon. The movie is displayed in the frame of reference of the LAMP instrument, with its field of view shown by the vertical red line at [0,0]. The LCROSS impact site moves to the left as time goes on in this reference frame. It shows how the timing of the signal LAMP detects is a combination of the expansion of the cloud and the motion of LRO past the impact site. It also shows how the signal observed by LAMP is from only a small portion of the entire cloud, emphasizing the need to use modeling to relate the observations to the overall release.
Video credit: NASA/Goddard/LAMP 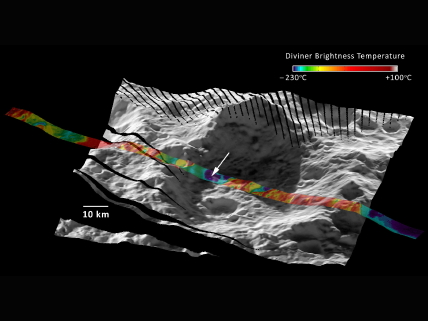 Click image to enlarge.
Diviner brightness temperature swath acquired about 90 seconds after the LCROSS impact, the location of which is indicated by the white arrow. Based on the Diviner measurements, the impact site was heated to more than 700°C (1,300°F).
Image credit: UCLA/NASA/JPL/Goddard 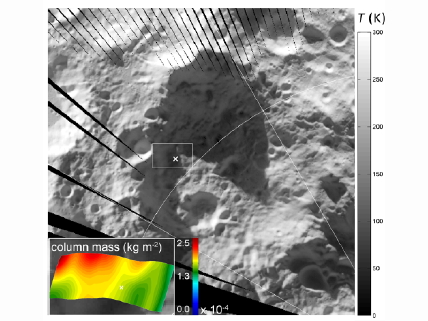 Click image to enlarge.
Amount of ejecta material in sunlight, in kilograms per square meter, derived from visible light measurements from the Diviner Lunar Radiometer about 90 seconds after impact. The ejecta cloud is concentrated at the upper edge of the image swath, due to Diviner’s oblique view of the impact site (‘x’). The grayscale image shows surface temperatures (in kelvins) in Cabeus crater measured by Diviner prior to the LCROSS impact.
Image credit: UCLA/NASA/JPL/Goddard 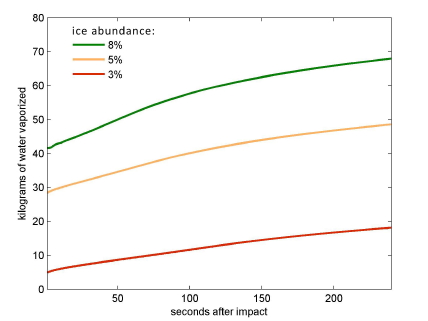 Click image to enlarge.
Simulated water vapor production for the LCROSS Centaur impact, based on temperature measurements from the Diviner Lunar Radiometer. After a sharp rise due to heating during the impact, a gradual flux of water vapor emanates from the steaming crater as heat propagates downward into the icy regolith.
Image credit: UCLA/NASA/JPL/Goddard

About the Papers
These results are featured in six papers published in the Oct. 22, 2010 issue of Science. Colaprete is the lead author of the first Science paper and Gladstone is the lead author of the second. Both describe what was detected in the LCROSS ejecta cloud. Colaprete's paper focuses on the observations from LCROSS's points of view as it flew directly through the impact plume. Gladstone's paper focuses on the LAMP instrument's detections aboard LRO, which observed the impact from a side angle.

The third paper's lead author, Peter Schultz, professor of geological sciences at Brown University, Providence, R.I. and LCROSS science team member, describes the features of the LCROSS impact and explains how they were created. The fourth and fifth papers by David Paige, Diviner instrument principal investigator at the University of California, Los Angeles (UCLA) and Paul Hayne, a graduate student at UCLA, describe the temperature cycle of the Cabeus crater and study changes from the moment of impact up to four hours after impact. The sixth paper's lead author, Igor Mitrofanov, LEND principal investigator, describes the results of the high-resolution hydrogen distribution maps of the Cabeus crater.